OK, so I believe everything is alive. Really everything. If I angrily slam a door, all the innocent life-atoms that make up the door and the walls and floor around it are all negatively affected – I’m slowing their evolutionary progress. I believe every speck of the universe is part of a grand journey towards a higher level of consciousness, from the mineral to plant to animal to human stages and beyond.

Human beings have a powerful consciousness. I make a significant impact on the life atoms around me because as a human being, my actions come from a place of self-awareness and deliberate choice. When I chew and digest a carrot in a in a cheerful or peaceful frame of mind, its atoms are furthered on their evolutionary path. [Be sure to catch the final video for visual confirmation of the influence of human consciousness on water molecules]

We have a family friend, Robert, who washes his car almost as vigilantly as he would bathe a child. He never lets it stay dusty and he keeps the interior and engine immaculate.

If I were still a life atom passing through the mineral realm (instead of the human realm that I presently occupy), I certainly would benefit from being part of Robert’s car for a while!

It’s not always easy to figure out how to live by the principle that everything is alive. I’m currently struggling a bit over how to deal with a the big Ganesh statue we shipped back from Bali for the house we’re rebuilding.

When I first saw this red stone carving of one of my favorite Hindu deities, I felt a strong pull of attraction. Many months later, Ganesh made it to Hawaii, then spent more months in his shipping crate.

We have recently encountered a number of snags in our construction process. Since Ganesh is considered the remover of the obstacles, Cliff expedited getting our stone statue into his position at the new house site. We didn’t even have our walls or a roof in place, but never mind, it was time to install Ganesh.

Transporting our heavy Ganesh down the steep, winding driveway and over a concrete
bridge to his new home was no easy feat. He almost tipped over the beefy forklift Cliff was using to transport him, and we had to counter-weight him with a few guys. Did I tell you this Ganesh weighs over a ton? The forklift wasn’t enough, We finally had to resort to using a boom truck to lift Genesh into his place of honor. 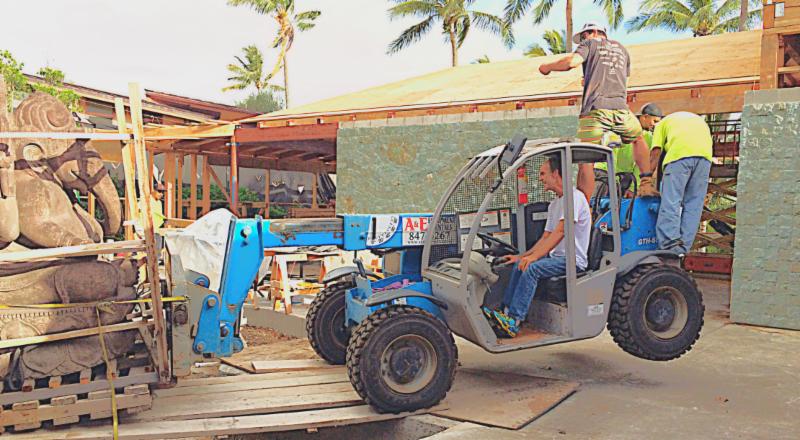 Now Cliff thinks we should have a welcoming ceremony for Ganesh. Hmmm…I’m chewing my lip a bit over this idea. It’s one thing to honor and wish to elevate all the life-atoms that surround us. It’s quite a different thing in my book to go around worshipping idols or trying to buy favors from the gods.

You may be wondering at this point, “Why DO you have all those religious symbols and statues around your house and Still & Moving Center?” Good question to ask someone raised to be a religious sceptic.

To me, symbols from the world’s spiritual traditions are potent reminders. The lovely wooden Kwan Yin in the Still & Moving Center entryway reminds me to have compassion and mercy. At our reception desk the Saint Francis statue holding a little bird evokes love for all creatures. In the Sun & Moon room, the copper Star of David with its upward pointing triangle suggests to me that we should always strive to lift ourselves up, while the interlocking downward triangle tells me to focus and bring down to earth the light from above. 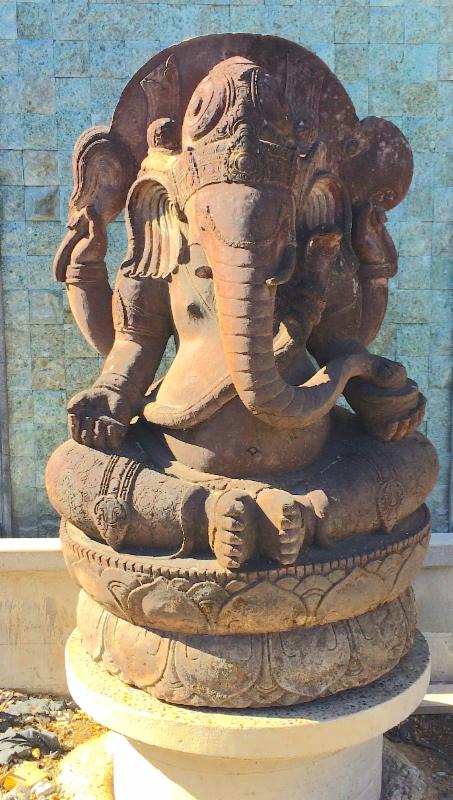 Ganesh represents that aspect of the universe that places obstacles in our way for our own good – kind of like the song, “Thank God for unanswered prayers”. Ganesh also symbolizes the removal obstacles from our path when we are ready to proceed forward. Seeing a beautiful image of Ganesh – like this very serene, grounded statue – helps me to calm down when I don’t get exactly what I want, when I want it. Sometimes I have wait years before I can look back and recognize the good in losing something I loved or in failing to achieve something I wanted. That’s an “Ah-ha!” moment when I realize the Ganesh principle has been at work.

Now back to my dilemma about a ceremony. What shall we do? In India or Bali there would be no question: they’ve got ceremonies down pat.

I was once at a puja, a religious ceremony, at a Hindu temple in California, with a very wise Indian man. When everyone else was offering coconuts, marigolds and ghee to the deity being honored by puja, he offered a half-eaten bag of Dorito chips. Of course! Why not? If all the life atoms of the cosmos are on a grand pilgrimage to becoming more and more conscious, shouldn’t we honor everything in the universe as sacred? Why not Dorito chips? And at the same time, the humor of his action showed me that he really didn’t take the outward ritual of the ceremony too seriously. He certainly wasn’t begging any favors of the deity with that bag of chips!

When Robert cleans his car, he doesn’t seem to be praying for any divine concessions from his car – other than the normal hope that it will continue to take him from point A to B. It’s just Robert’s way to care for things. In India there’s a day of the year when the drivers say mantras and honor the rickshaws that they pull for a living. What if Robert views his car as being sacred? Robert takes great care of everything he owns, from his plastic toothbrush to his leather shoes.

Curious, I called Robert this morning and asked, “What are you thinking about, what are you feeling, when you clean your car?”

Robert replied, “Oh, I don’t know. I’m just thanking my car for getting me around safely. And when I clean my shoes, I just thank them for protecting my feet and keeping them warm.”

Gratitude. It’s not an asking for favors. It’s a recognition and appreciation for what we are given. Just gratitude for the things themselves, beyond even the human beings who crafted them. Robert gave me the key to treating every ‘thing’ as being alive.

So whatever sort of welcoming ceremony we may have for our Ganesh statue, I trust that it will be an expression of gratitude. At any moment in time, we can offer thanks to even seemingly inanimate things, appreciating all the little lives that make up the universe around us.
Moving in Stillness and Resting in Joy with you,