Sooriya Kumar is a small-statured man who ended up with a GIGANTIC problem on his hands. And I mean a monstrously huge problem. Fortunately, he has an expansive heart and utter faith that help will come when help is needed. 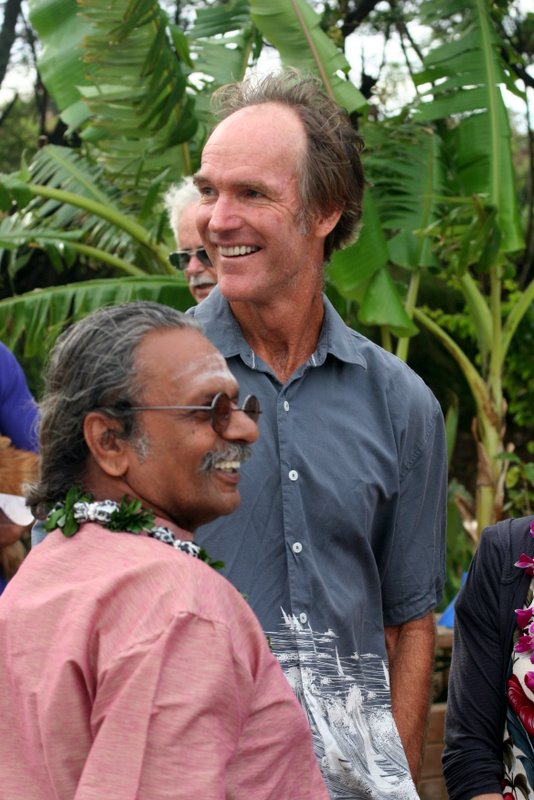 Some of you know Sooriya as the organic farmer and copper artist who created all the copper art on the walls of Still & Moving Center. Cliff and I had met Sooriya by chance more than a decade ago. We admired his art and his dream for an organic farm, and especially his commitment to help humanity.

Let me begin by saying that Sooriya grew up in a family in Sri Lanka for whom service to the community comes as naturally as breathing. Sooriya remembers being about six years old and learning herbal healing arts from his grandfather, who would freely heal poor villagers, then send them down the dusty road with a bag of rice to be sure they could eat properly.  Very devotional as well as charitable, his family always provided free shelter, food, and medical attention to all pilgrims traveling through their village on the long, annual religious pilgrimage through Sri Lanka. 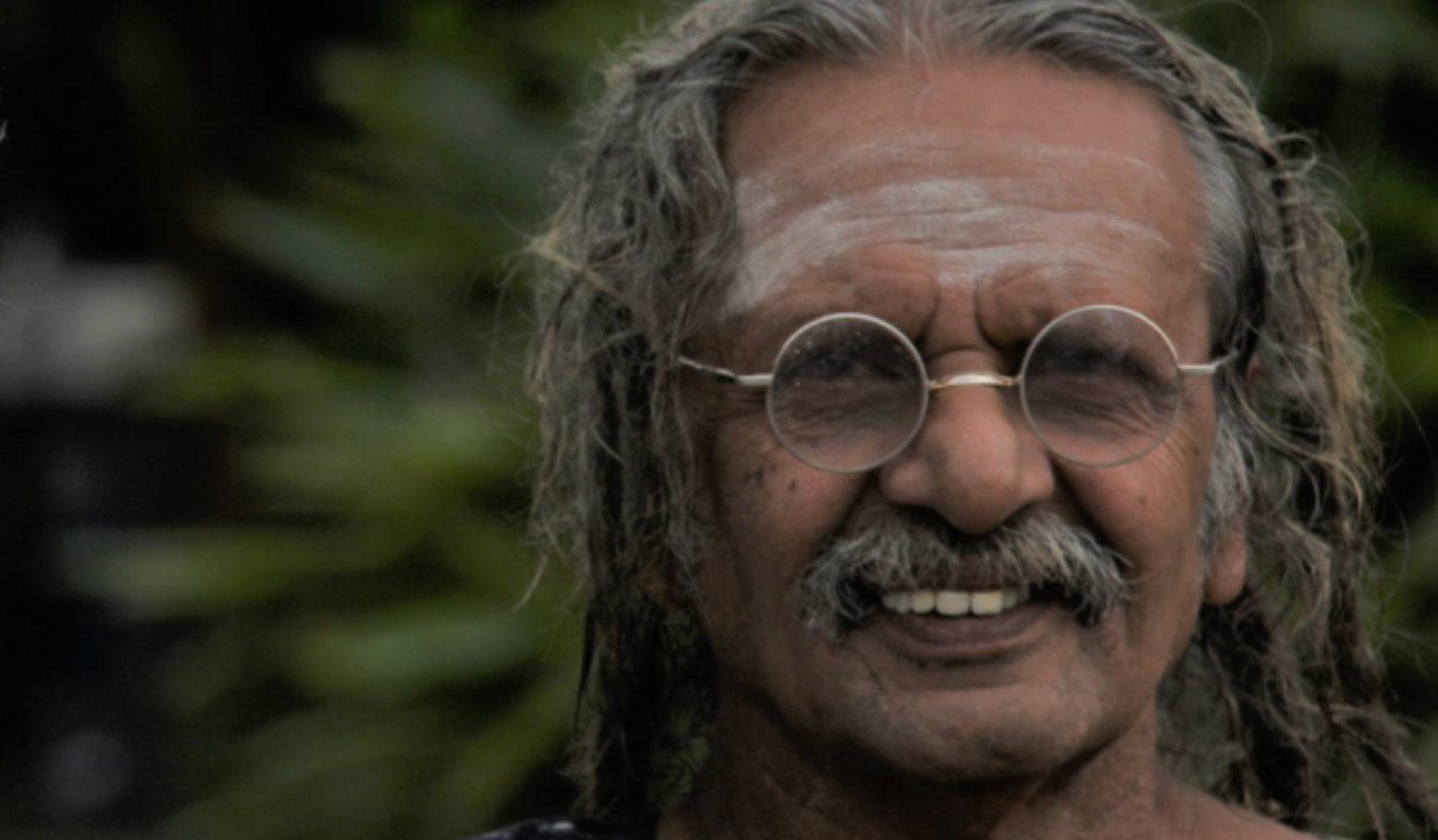 Even with all that good will from his family, Sooriya lost his father to murder when Sooriya was just a young man. As the eldest son, Sooriya took his father’s body to the forest and performed all the proper rituals for his cremation ceremony. That accomplished, Sooriya realized that he had a smoldering rage inside that would destroy him if he didn’t release it. So, he left his home and family, taking no money or possessions, to wander for many years, living as a saddhu, a religious ascetic, staying in caves, sleeping on the ground, seeking freedom from his anger.

After decades of renunciation, walking, spending time with holy men, and praying, all over India and even Europe – the grace of love re-entered Sooriya’s heart. Emotionally and spiritually healed, Sooriya was ready to re-enter the world. But where would he find his dharma, his life work of service? On his travels through life, Sooriya acquired and perfected an ancient skill: pounding copper to produce beautiful pieces of art. His copper work became his offering. To know more about Sooriya’s early life, you can read “A Life Journey from Sri Lanka to Hawaii” by Claudia Ackermann. 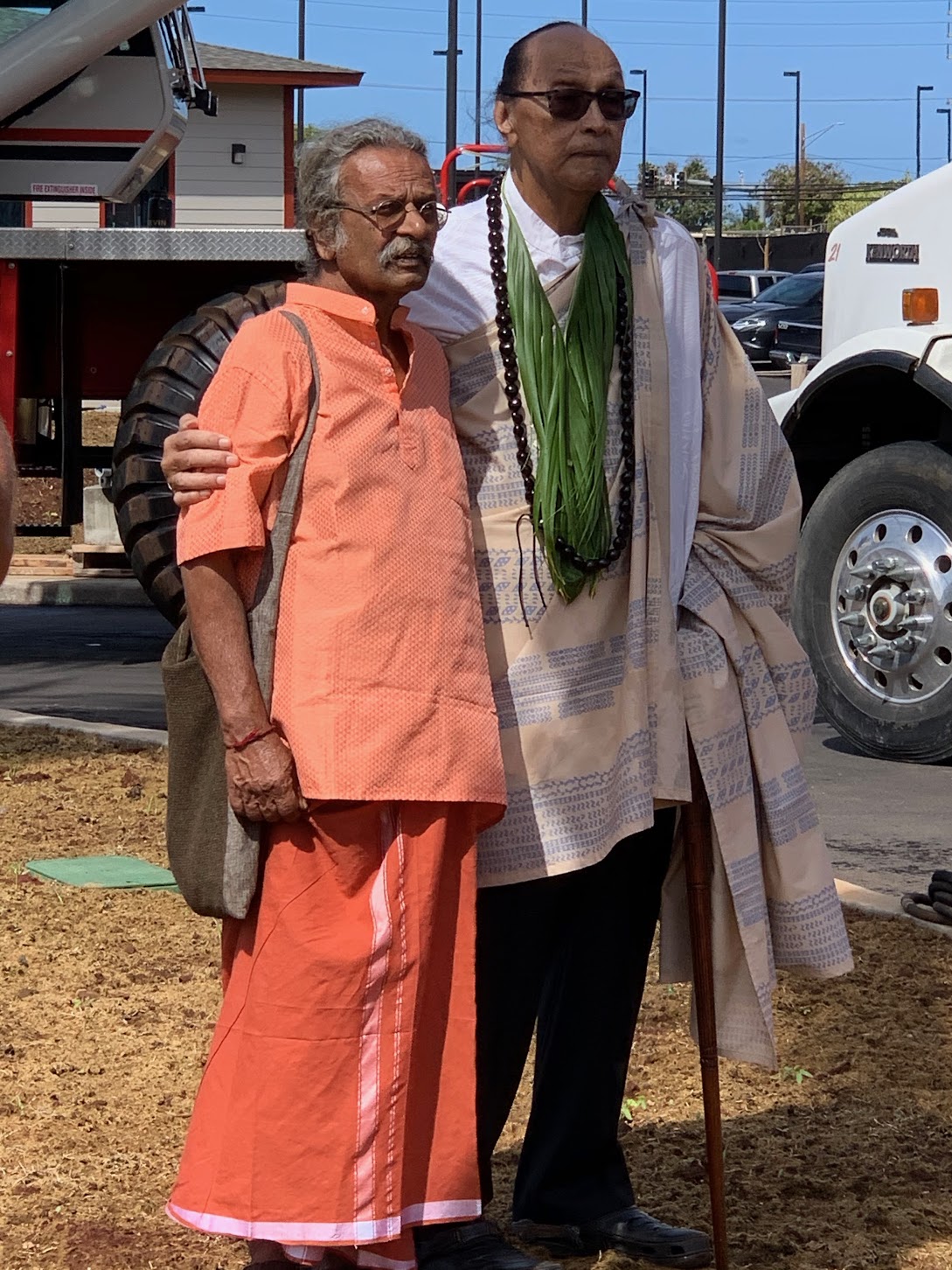 About 35 years ago, Sooriya landed on ‘Oahu. Like all of the artist’s of old, Sooriya needed a patron, someone who would make it financially feasible to devote himself to his art. That he eventually found in the remarkable Kanahele family of Waianae, between Aunty Aggie and her son Brother Kamaki, as Sooriya so fondly refers to them. These two ali’i began the Hawaiian renaissance of ‘Oahu’s leeward coast by creating and running the Waianae Coast Comprehensive Health Center. You will find Sooriya’s copper art, crafted over a couple decades, gracing the walls, inside and out of nearly every building on the campus, as well as the walkways, lanais and gazebos.

And Sooriya with his longtime friend and travel companion Peter LeCompte managed to secure an agricultural parcel, which they named Mouna Farm Arts & Cultural Village.

So where’s the problem? Sooriya’s healed from his family trauma and he’s found his life work creating copper art and farming in Waianae. Well….

About 7 years ago, while she was still alive, Aunty Aggie told Sooriya about the Nanakuli Community Center that she intended to build for the people of the leeward coast, and she asked Sooriya if he could make an appropriate piece of art for the front of the building. Sooriya immediately assured her that he would 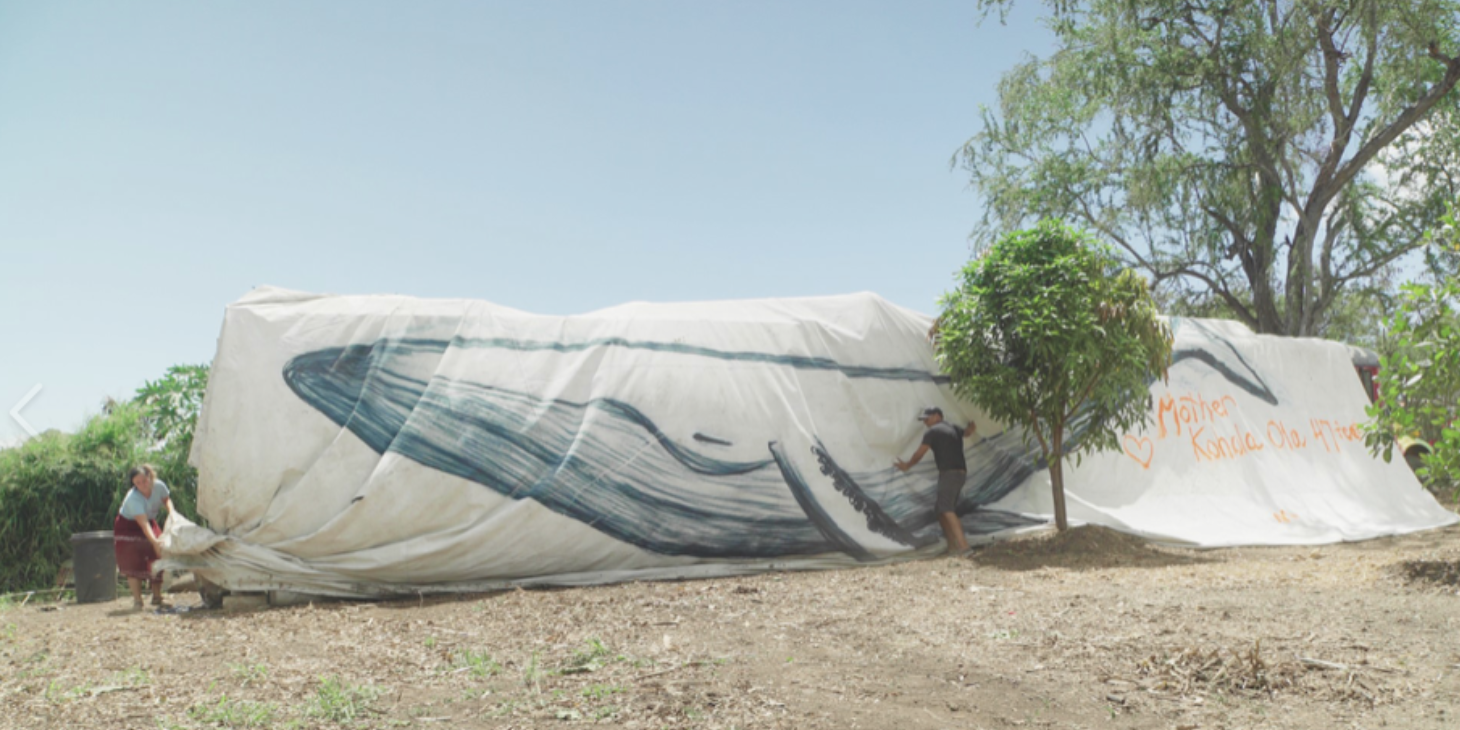 create something magnificent for her… although he had no idea at that time what that might be.

Meditating that night, Sooriya came up with a whale of an idea. Literally. He saw whales, in his mind’s eye, and he determined that he would create the largest copper whale sculpture in the world! This sculpture would be not just for Aunty Aggie, but for the whole community, in fact on behalf of the entire earth. Whales sing and swim in the oceans that connect all the continents. Two life-sized copper whales, a mother and baby humpback, would “swim” on the wall of the new community center.

And he set about to do so. He called his endeavor Koholā Ola – The Whale that Gives Life and also Ke Koholā No Ma Maluhia Honua – The Whale for World Peace. Sooriya put out a call: “All the people have heart. Children and kupuna (elders) of all ages, all spiritual beliefs, all ethnic backgrounds must come together to bring world peace, unity and healing through art. All are welcome to build and share in the spreading of this Whale’s message.” 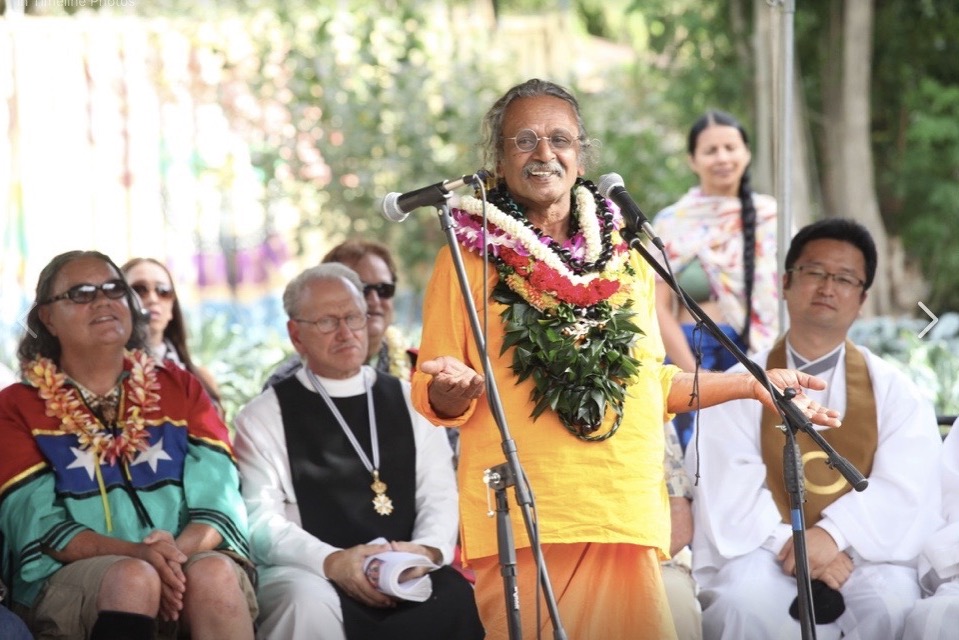 making.  As Peter LeCompte says, “This project is from the Waianae Coast community to Waianae Coast for Hawaii, from Hawaii, to the world, from the world for world peace and awareness…We are all together in this world from land to sea. From plant to people to water and whale.”  Before the copper work started, Still & Moving hosted June Bloom & a Whale’s Tune in 2018, with whale-inspired dance and aerial performances and a presentation of whale and dolphin rescues by David Schofield of NOAA.

In early 2019 Sooriya began making mini whale sculptures to test his ideas and techniques. Organized by Sonia Fabrigas, Mouna Farm hosted one group after another to experience the joy of celebrating whales through working in copper, and mostly in sharing Sooriya’s vision of world peace. Still & Moving Center hosted a Whales for World Peace event at Mouna Farm in November of 2019 at which our people also pounded the copper. 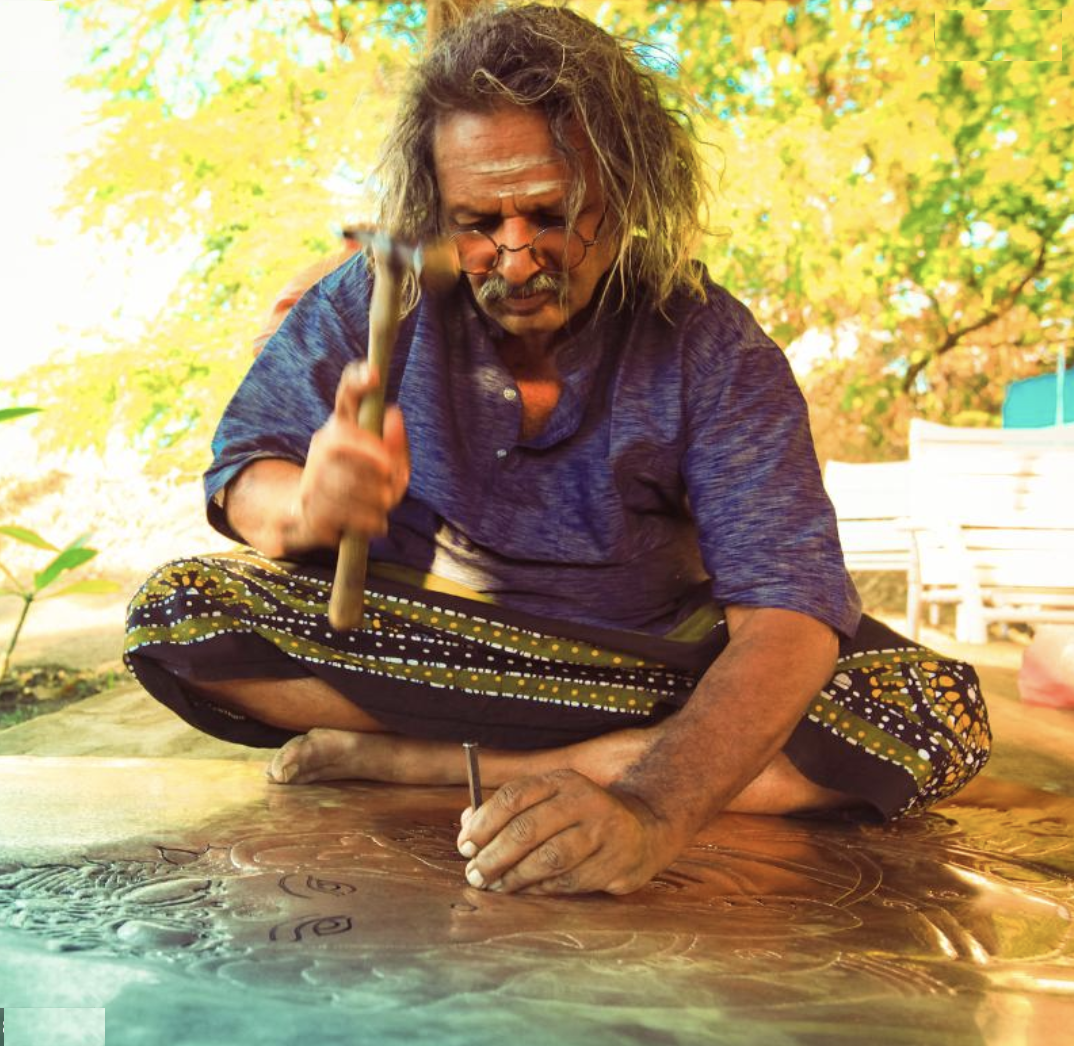 OK, so Sooriya had embarked on a great project…. Where’s the problem???

Sooriya thinks big. He had no clue when he started the whale endeavor that the ancient copper technique he’d been using for decades would not enable him to accomplish a project of the magnitude to which he had committed himself.

Then Sooriya came face to face with professional engineers who were overseeing the construction of the community center, reviewing the 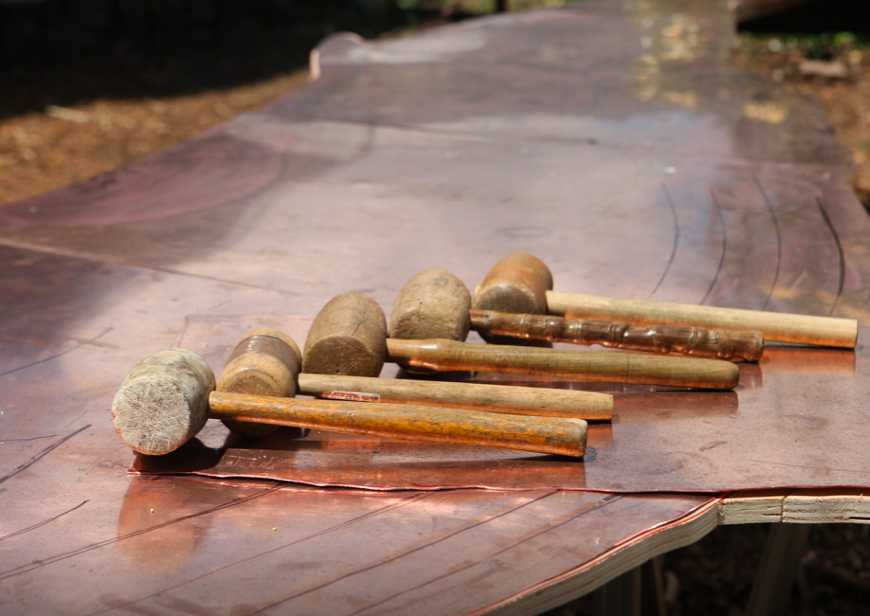 plans for the safety and structural integrity of a building that should last for decades to come. When they saw a proposal for the LIFE SIZE WHALE art, they voiced their concerns about the soundness and durability of the sculptures. They had no intention of taking liability for a whale – even a copper whale – potentially blowing off the side of the building!

Sooriya is an artist, an enormously talented artist, whose simple techniques go back to perhaps as early as the 4th millennia, BCE. In this 6,000 year old method he used nothing but mallets, metal-cutting shears, and tongs for heating the copper in the fire. Add a little acetylene torch to solder copper sheets together and Sooriya had thought he was good to go. Now he was completely out of his depth and overwhelmed by the engineers’ scrutiny. He had no idea how to move forward.

Enter Cliff, who always keeps an eye out for Sooriya’s endeavors, helping out with the practicalities as he can. Cliff works with structural engineers and their requirements all the time in our company, Prometheus Construction. Cliff assured Sooriya he would take care of the engineering of the project. 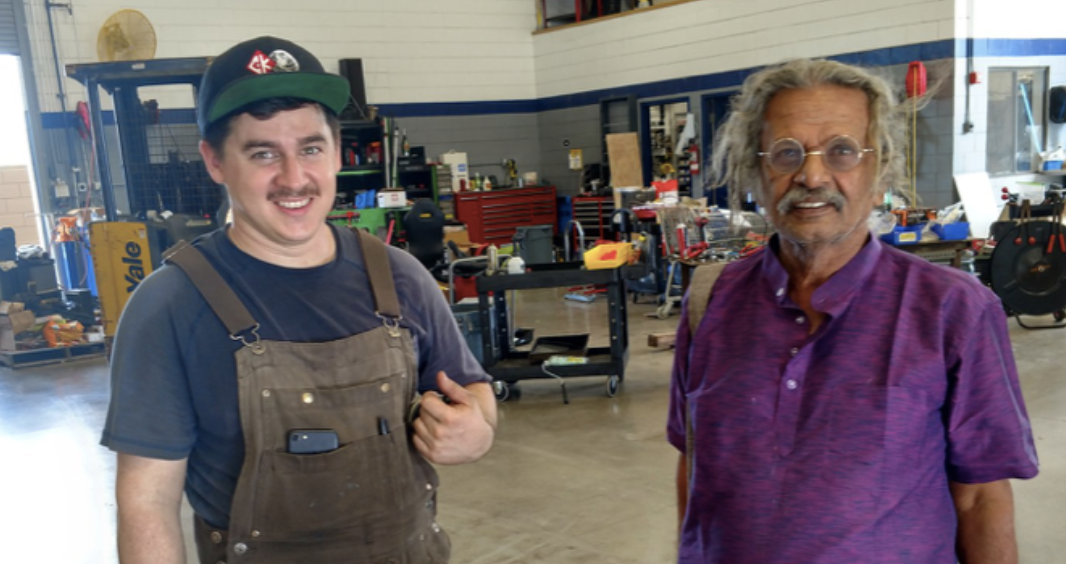 As good fortune had it, we employ an amazing welder / fabricator – Mason Willard –  who has the skill set to design and build a structural support system that would hold up the whales. So the whale project moved to the Prometheus Construction warehouse for the heavy-duty construction work. Using modern power tools, Mason cut out the entire body, tail and fins for both whales in a fraction of the time it would have taken Sooriya by hand. Next, Mason used arc-welding techniques to secure all the copper pieces together. 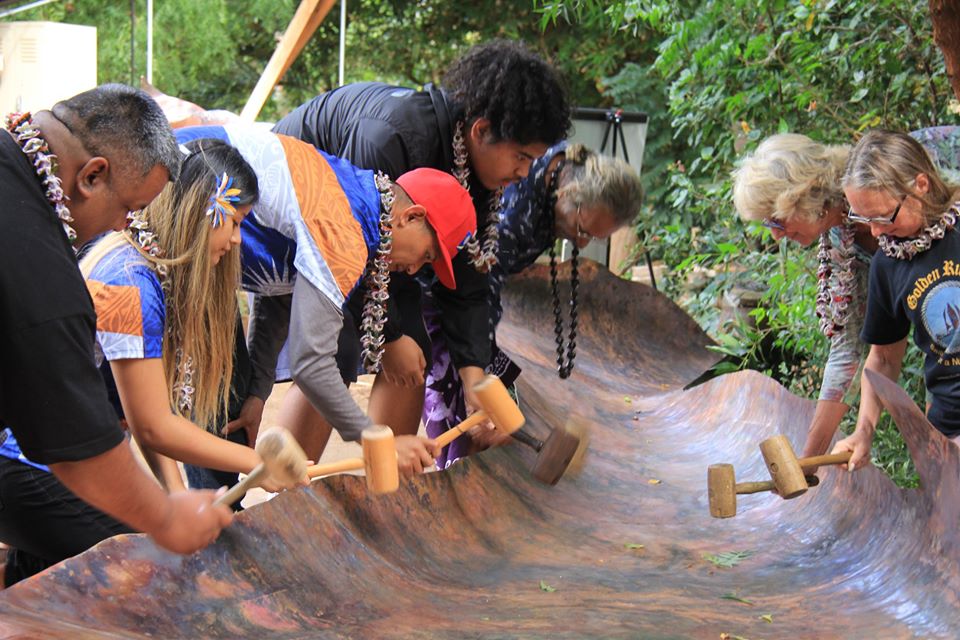 the copper whales into shape. Sooriya reminded them that they were helping to create a legacy piece that they would be able to show to their grandchildren in years to come. And yet, all the guests’ pounding only accomplished a tiny portion of the overall work needed to shape these 3-D whales, work which Sooriya and his skilled assistants provided.

Meanwhile, back in the warehouse, Mason engineered and constructed a steel superstructure to back the giant beasts, one that not even the nit- 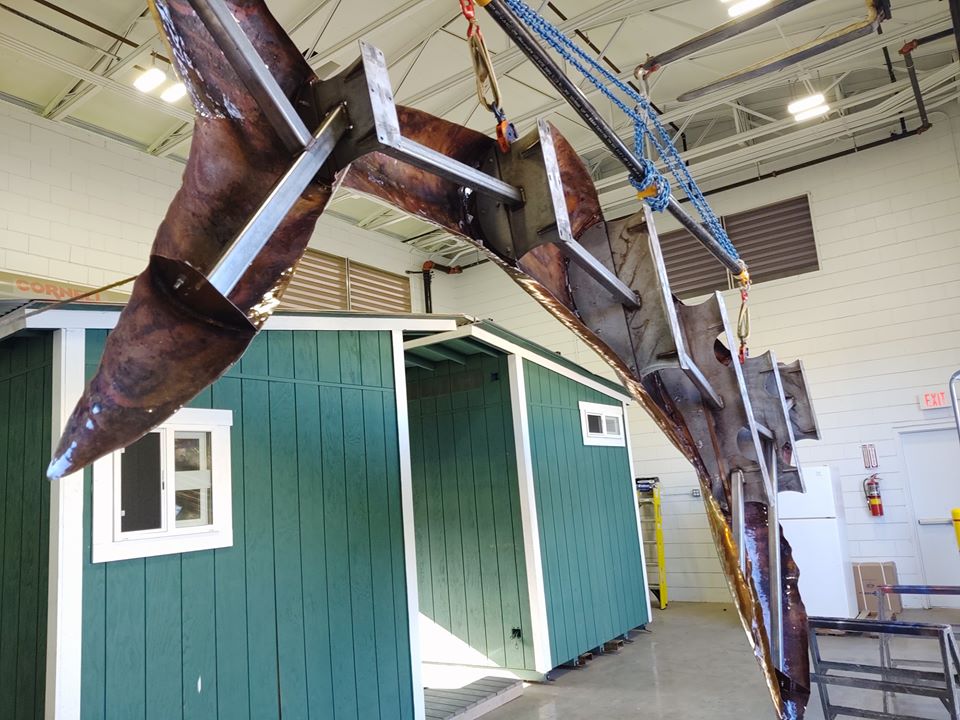 picking engineers could find fault with. He worked daily for several months on the project, often side by side with Sooriya and his assistants loudly pounding away. The din reverberated through the warehouse into the surrounding neighborhood. As Cliff later remarked, that very vibration, done with hearts of love, was sending a message of peace into the world.

Finally, April 15, 2020, the whales and their undergirding support structure were complete and ready to be installed.

The whole project had become quite a weight on Sooriya’s mind, as we can imagine. None of them had ever worked with such a mammoth project in copper and steel. Was it going to work? Would the whales match Sooriya’s initial vision, once they were up on the wall of the community center? How would they get up there? Crane? Would the crane tip over and drop the mother whale, who now weighed over 2,000 pounds? 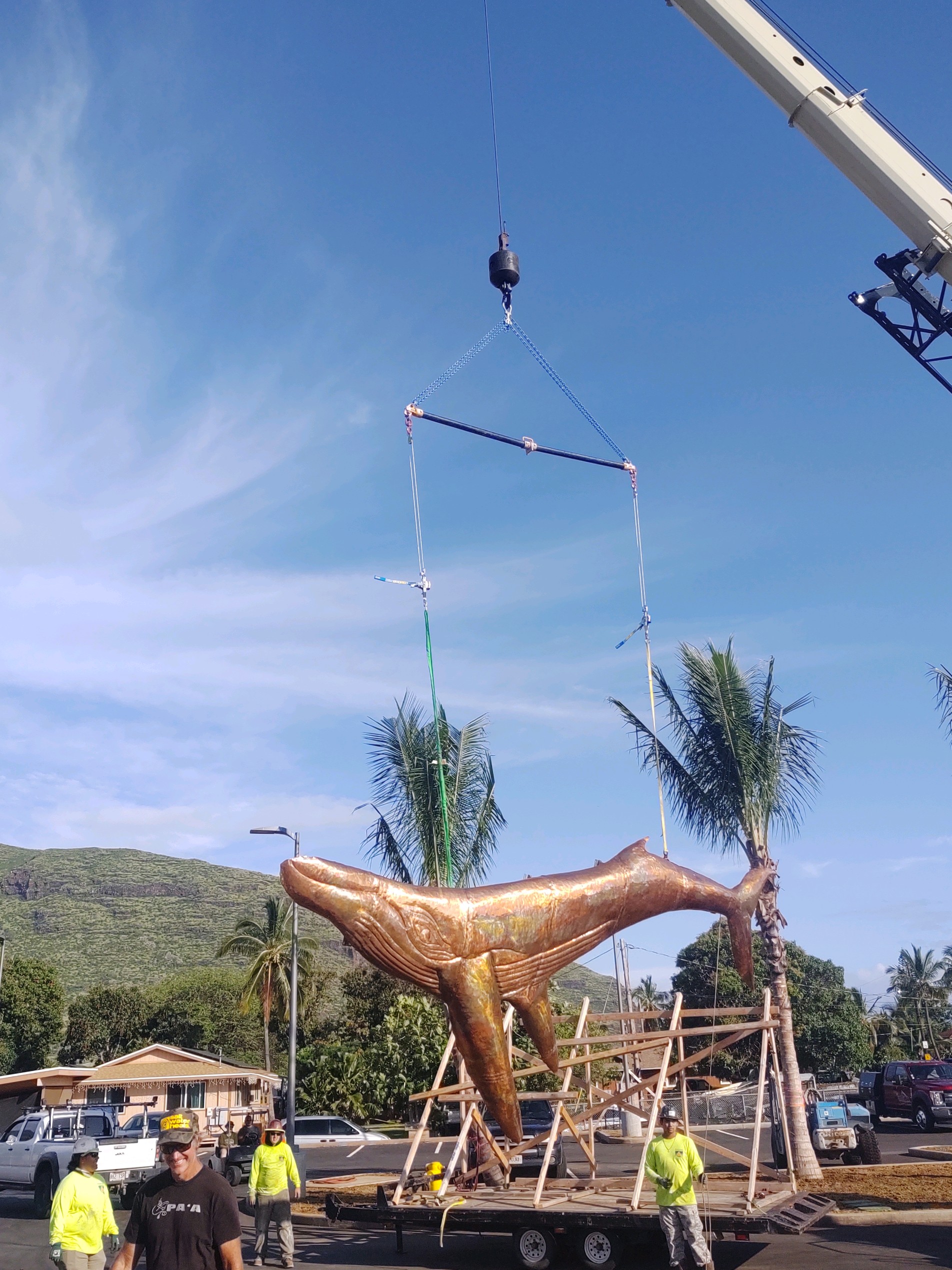 As always, Sooriya relied heavily upon blessing ceremonies to invoke the power of the divine to accomplish the task, with many elders adding their prayers. He also had to rely on the work of younger people and contemporary machinery to complete the work at hand.

On that day, it all came together. The whales were blessed at Father Gigi’s farm on one end of Waianae, then paraded on trailers through the length of Waianae to the Nanakuli Community Center, gracing all who saw the whales “swimming” along the highway.

Reaching their destination, the whales were blessed yet again by Sooriya’s patron, Kamaki Kanahele, before they “flew” through the air, landing on the wall, where they were anchored into the concrete block with nearly 100 steel support rods.

Ta Da! Problem solved! Father GiGi put it like this: “Where there’s a will, there’s a whale!”  Sooriya had fulfilled his promise to Aunty Aggie, and in the meantime graced the lives of thousands who helped to create the whales, and many thousands more who will see the whales and receive their message of world peace. 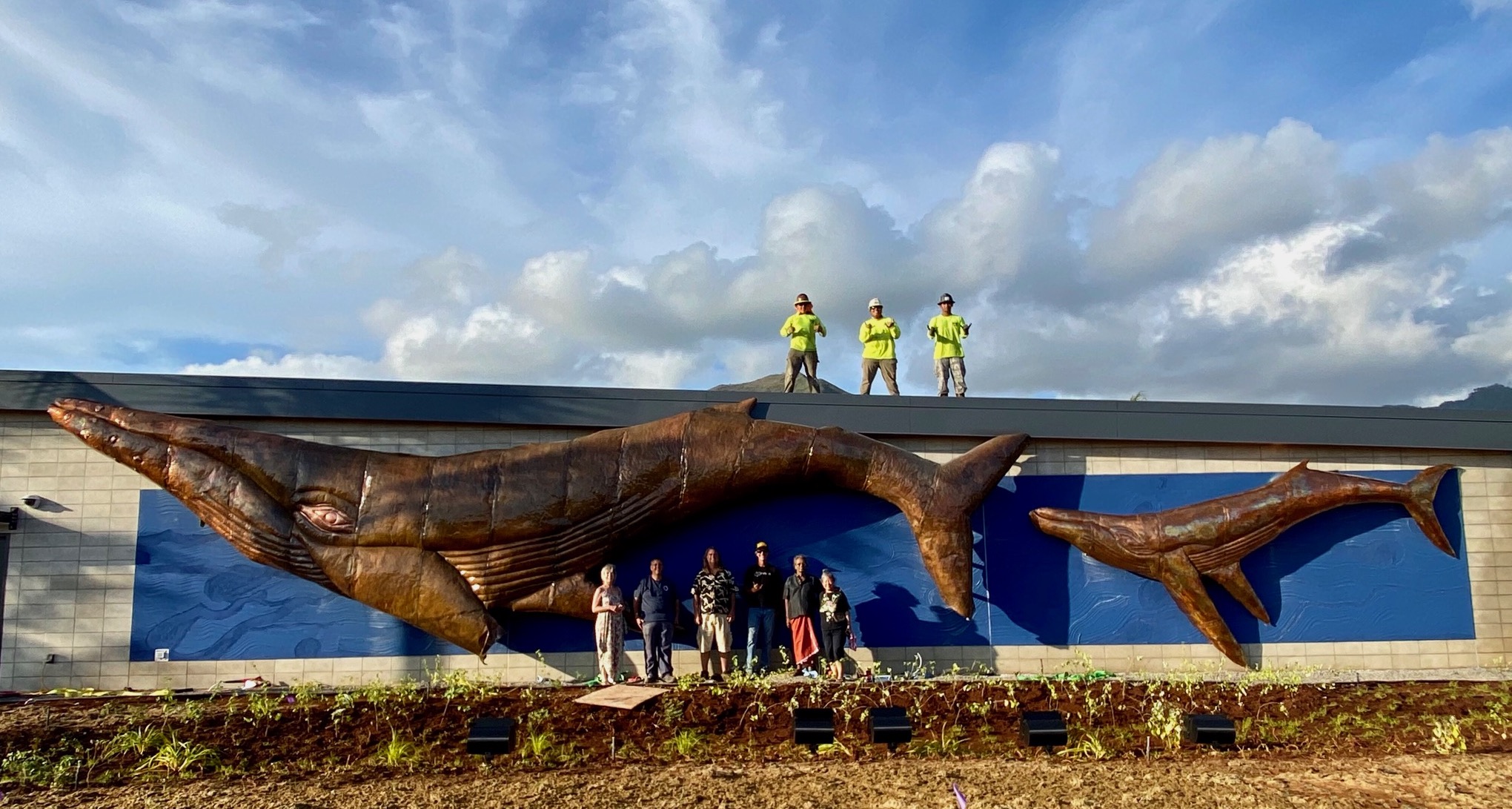 As Sooriya understood all along, his ‘problem’ became everyone else’s opportunity. In the realm of sacred work – work of a higher purpose – each person who puts a hand to the task receives its blessings. The more the work, the sacrifice, the greater the blessings.