Someone on this island is doing something remarkable! Her name is Blanche McMillan, and she has invited at least 15 homeless people from Waimanalo Beach Park to come live in her backyard.

What’s more, she’s managed to get tiny houses for them to live in, doing as much as her resources and her neighbors’ tolerance will allow. Cliff and I attended the blessing ceremony for the project on Saturday.

I’m writing this with a hope that all your love and light will spill over into her heroic efforts in the face of daunting odds. What’s remarkable about Blanche’s place is that these folks are not being “othered” out into the boonies somewhere. They are being incorporated into an existing neighborhood. That will be no easy feat.

One of the new inhabitants I met at the blessing, along with her young son, was weeping on the doorstep of a tiny home. Tara has not had a 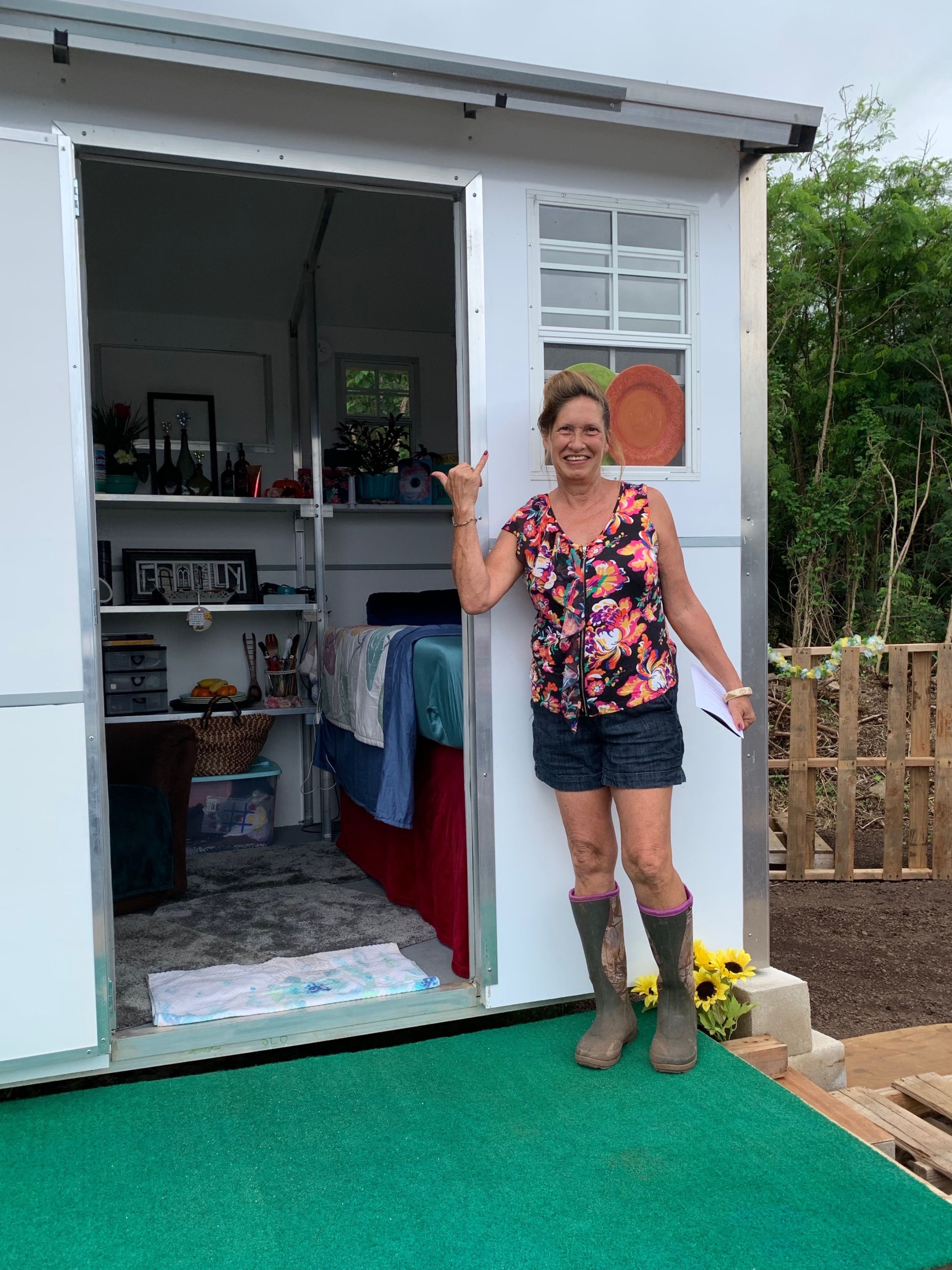 roof over her head in 7 years. Her tears seemed to be not only tears of joy, but also of worry… Isn’t this too good to be true?

Pamela, who has worked in construction most of her life, helped my husband Cliff to organize fellow homeless volunteers to assemble the tiny home pieces when they arrived. Twists and turns in her family life had devolved into her living out of a camper, then in a tent. When she, her daughter and granddaughter needed a place to stay last summer, the Waimanalo Beach Park campers welcomed them in. In fact, the generous inhabitants of four tents pulled up their stakes and moved everything to make room for Pamela in the line-up. By the time of Saturday’s blessing, Pamela had already decamped from the park into the kau hale and fully organized and decorated her new tiny home. 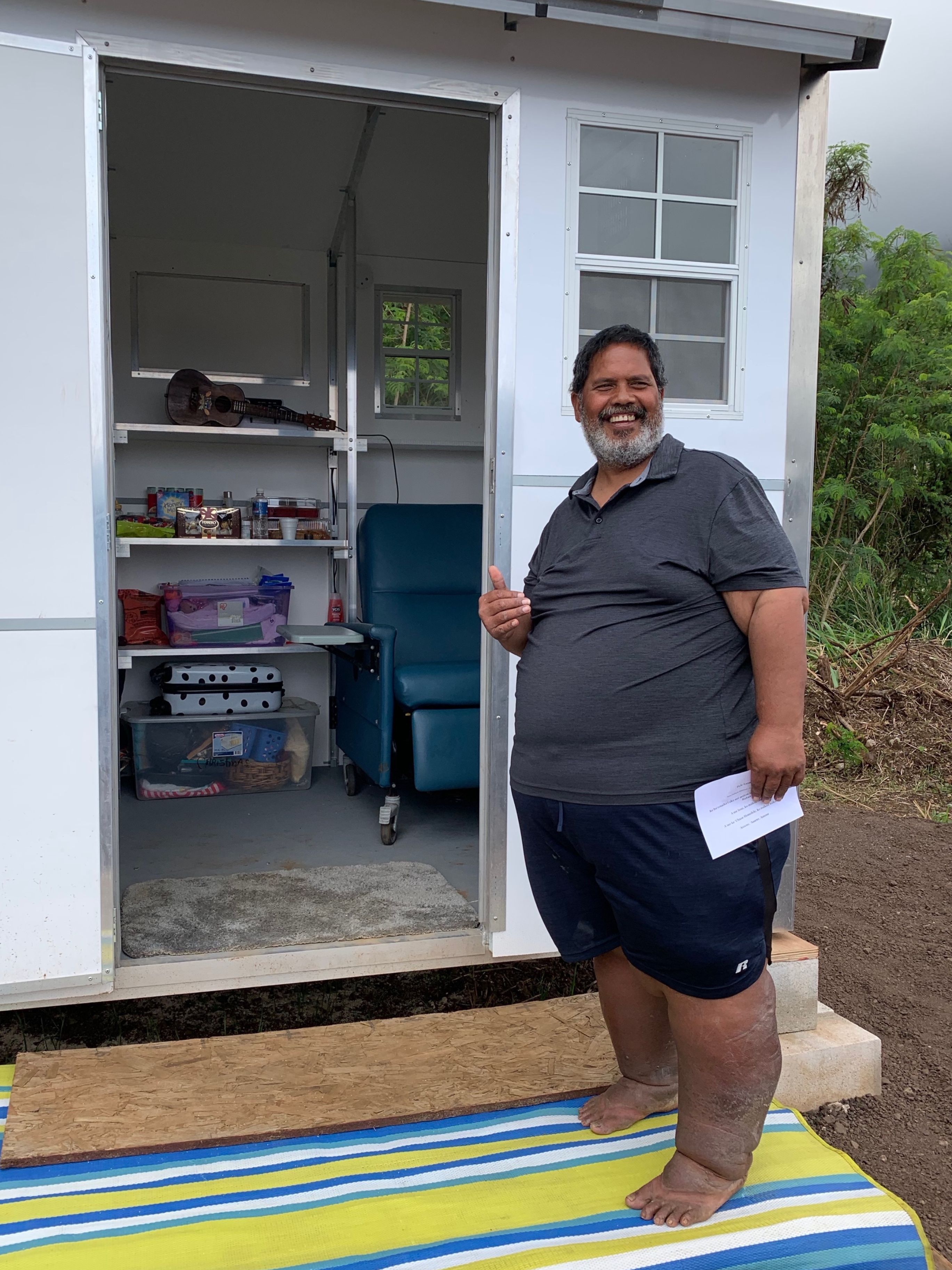 BJ, a man with deep, caring eyes, has been in and out of the ER for serious medical problems, his legs swollen so big he can hardly walk. After he lost his job as a tour bus driver and then his place on his uncle’s couch, he ended up at the beach park, sleeping at night in an old recliner chair – so bad for his legs. BJ, with Pamela and several other homeless folks, worked as hard as his health would allow to help put together the tiny homes. We’re so glad he’ll have a home with a bed where he can elevate his feet.

Most of the new residents seem much less “together” than Pamela and BJ; they are facing many challenging internal as well as external circumstances.

Who is the woman making all of this happen? How is she managing to do it?

Born and raised in Waimanalo, Blanche is one determined wahine. Go back into Blanche’s life story and you’ll find that she’s been caring for others her whole life, professionally performing acupuncture, shiatsu, and lomilomi, particularly on sickly children.

Over the years, she and her husband Willy raised 3 children, adding 5 adopted children to the family, amongst more than 20 foster children that the couple took in over the years. Some of their children and grandbabies continue to live under their roof to this day, 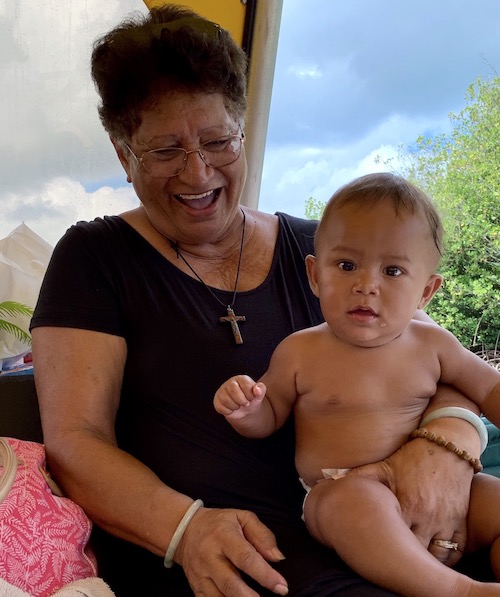 For nine years Blanche served as outreach coordinator for the Saint George foodbank in Waimanalo, helping to feed and clothe those in need. As she wondered about a better solution, she had visions of the plentiful life her ancestors used to lead on the land.

In 2015 she determined that it was time to bring their Hawaiian lifestyle and culture back to the people of Waimanalo: farming mauka to makai, from the mountains to the sea. So she marched into the main office of the Department of Land & Natural Resources and let them know she wanted to take responsibility for 15 acres of DLNR land near her home. Amazingly, they agreed to let her do it!

It took Blanche three years and a lot of red tape just to get an Environmental Assessment on the acreage to convert it into agricultural land. She was ready to start a community farming endeavor.

Meanwhile, the homeless encampment along Waimanalo Beach had become entrenched, dangerously close to the highway and preventing the public from fully enjoying the beach. Others in the community had a somewhat different idea for Blanche and her land.

Scottie Reis-Moniz and Ui’ilani Fonoti from the nonprofit YouthBuild Waimanālo came to Blanche looking for construction work for the youths they are training to enter the job market. Likewise, Councilman Ikaika Anderson and Lieutenant Governor Josh Green approached this staunch, compassionate member of the community in 2019. “Blanche, we need you. Can you help take care of the homeless here in Waimanalo?” they pleaded.

As she does with every decision – large and small – that she makes in her life, Blanche prayed on it. And she reports that “the Man above” said yes to her. She agreed to help house the homeless and plunged into the task whole-heartedly, meeting with people of various organizations who might help.

As I mentioned to you previously, my husband, Cliff, has building skills and he cares a lot about the homeless. Last year he built a couple of 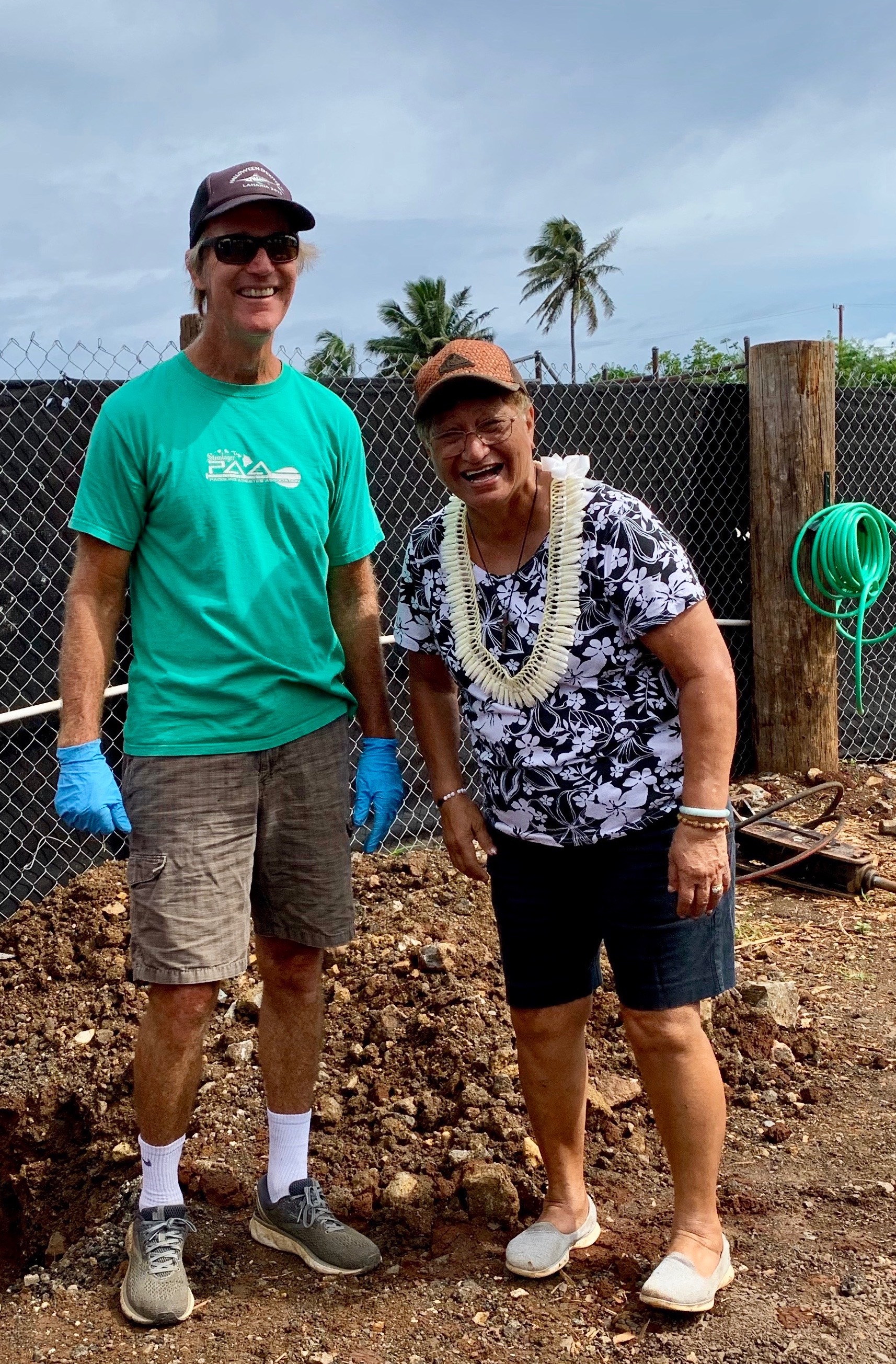 prototype tiny homes and reached out to see whether they might be useful. In July Cliff got a call from Brooke of the Lieutenant Governor’s office introducing him to… guess who: Blanche.

Blanche and Cliff – plus many other key people – have been working to create a small village for the homeless ever since: some place safe, secure, and stable where people without a roof over their heads can make their way back into society.

‘Not In My Backyard’ (NIMBY) is a common response to many innovative projects. Blanch held many neighborhood meetings to discus the problem and present her ‘Yes In My Backyard’ (YIMBY) solution. Fed up with about 5 noisy nay-sayers, Blanche and her ‘right arm’ Cindy Parker went out into the community and got 1500 signatures from the people of Waimanalo on a petition to bring the homeless into the McMillan’s backyard!

Then the County planned a sweep to clear the Waimanalo Beach Park encampment by March 1. Cliff called the ‘powers that be’ and got the sweep delayed until April 1. Blanche and her support group went into hyper-gear to prepare a place for at least some of the homeless to land.

design and arranged for 9 tiny homes to be shipped to the island, pronto. Meanwhile, Waimanalo Youth Builders – with their 16-24 years olds learning job skills – constructed a compact home for 3 inhabitants, with two more homes about to be built.

Cindy and Chad Parker, a brother and sister, have stood shoulder to shoulder with Blanche the whole way. Cindy is a drug rehabilitation counselor and Chad a retired social worker, both of whom Blanche grew up with. Also at her side is an RN named Brenda. They will be on the front lines of the kau hale with Blanche.

Immediately after the blessing ceremony, Cindy began formal interviews of the new potential inhabitants. Residents will 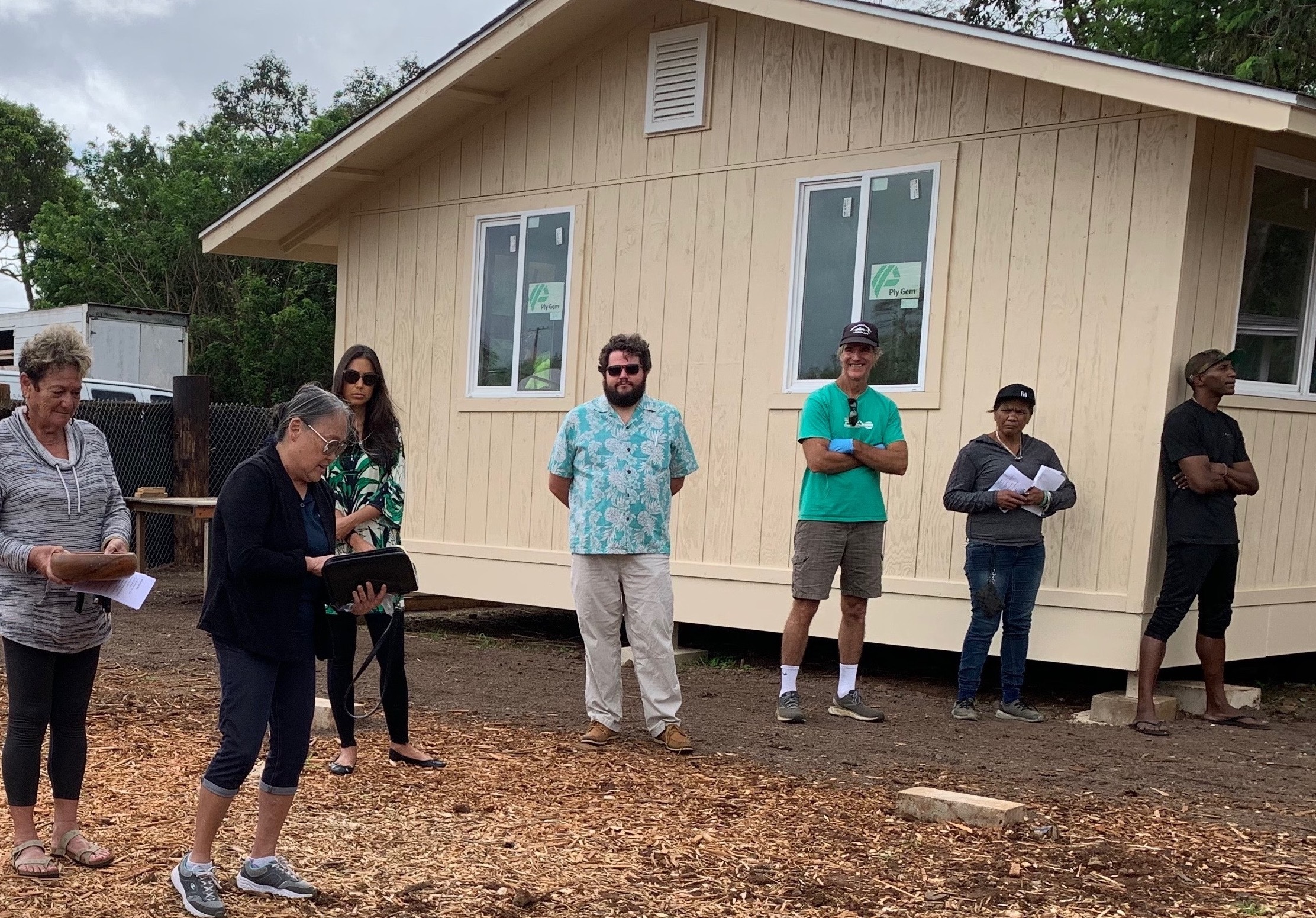 sign a contract to pay a small monthly rent, follow a set of community rules (no fighting, substances, vulgarity), take turns cooking in the outdoor kitchen, ohana-style, and keep their tiny homes clean and orderly. They will also have access to various services, health providers, etc. Many of them need help just getting a birth certificate, social security card, and ID.

And the whole group will be expected to help grow a huge community garden on the land adjacent to the village. A 100-gallon aquaponic system is on the way. They will be able to sell 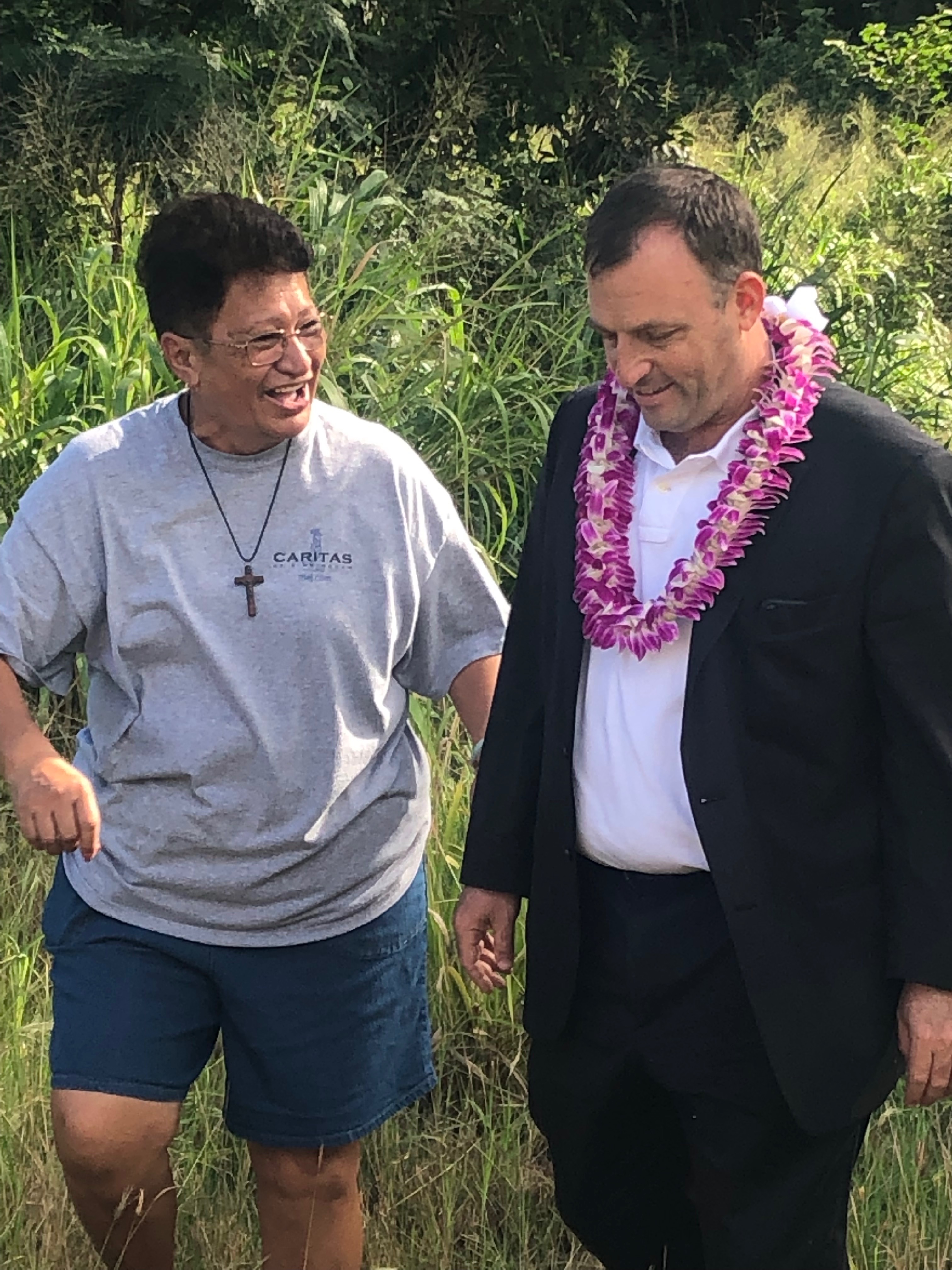 excess food, and perhaps even herbal medicine that they learn to make, at the Waimanalo Co-op. The idea is to help folks move to greater self-sufficiency.

Blanche is grateful for the help of Lieutenant Governor Green and his assistant Brooke Wilson, to Councilman Ikaika and his wife Lisa Anderson of the Hawaiian Homeland Health Care Center, to Mary Oneha, CEO of Waimanalo Health Center, Senator Laurie Theilen, Representative Chris Lee, Captain Todd of the local fire department, James Koshiba, Alana and Kathy of Hui Aloha, Nani Medeiros of Home Aid, and many others.

YouthBuild Waimānalo will have generously provided four houses by the time they finish. PalletShelter donated one of its tiny 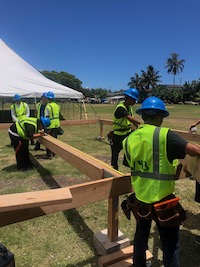 houses, and H-4 has provided a month of sanitary toilets. Otherwise, Blanche has completely relied on a few private donations and her own family’s resources to launch this huge project. She trusts that others will come forward to contribute.

Now begins the daunting task of managing this haven for the formerly homeless. The generous spirit of the neighbors will no doubt be tested. Coronavirus may pay a visit or even wreak havoc. Blanche will keep praying and relying upon all the love and care that her huge heart has to give. And everyone there will need an army of guardian angels!

After Kahu Zoe Akau’s blessing on Saturday, Luana Albino, one of Blanche’s supportive

neighbors, spoke to the incoming residents of the kau hale. She reminded them of Moses leading his people out of Egypt. “Go forward,” she urged them and all of us, “Do not look behind. Keep moving forward!”

You’ll be glad to watch the touching video at the bottom of this article!