Letter from the Director of Still & Moving Center 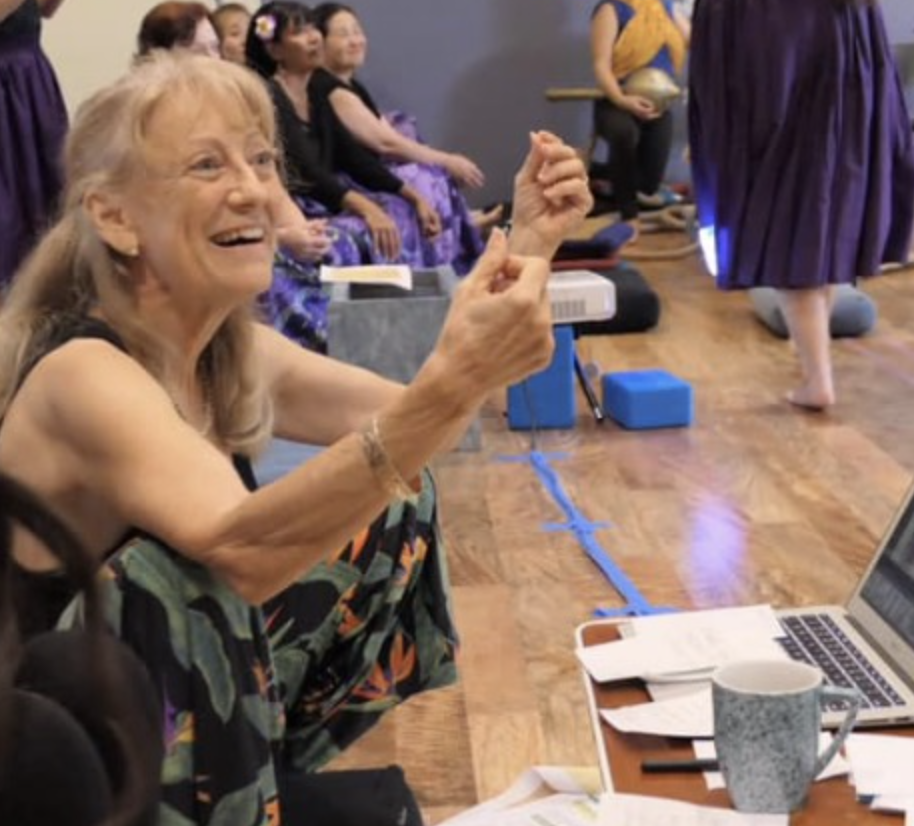 Something about this year’s Diwali celebration left me soaring. As I write to you, it’s been over a week since we enacted the ancient Ramayana story for Diwali, and I still haven’t landed with a thud. For some unknown reason, I still feel as if I’ve taken wing.

Each year, I forget how much I love our telling/acting the story of Rama. I remember the difficulty of recruiting a cast of characters, and I dread having to twist people’s arms to be in it. I know they are going to have a wonderful time being part of it, but THEY don’t know that. 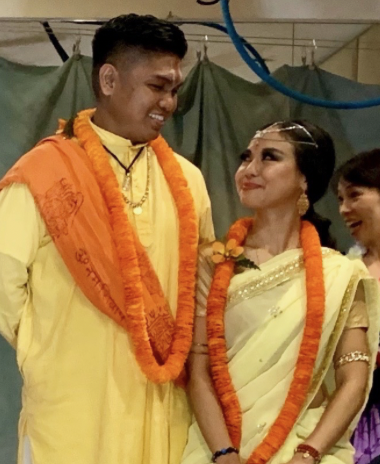 The process starts with finding our core characters, starting with Ram, the crown prince, and his bride, the peerless princess Sita. Then there’s the demon king, the princess-grabbing Ravana, and the monkey hero Hanuman who can leap over the sea in a single bound.  And we need a conniving stepmother for Prince Ram, who can convince his loving father to banish Ram to the forest instead of crowning him king. And a large supporting cast… it’s a tall order.

Our good fortune this year brought to my attention a beautiful young couple in Master Jonah’s qigong class, Clyde Bagaoisan and Charlene Miyahara. Jonah encouraged the two to participate, saying they’d be doing something they’d never forget. Neither of them had ever acted, and I was asking them to take the lead roles. As dutiful students, they took their teacher’s advice and signed on as Prince Ram and Princess Sita, not at all sure or excited about what they were heading into! 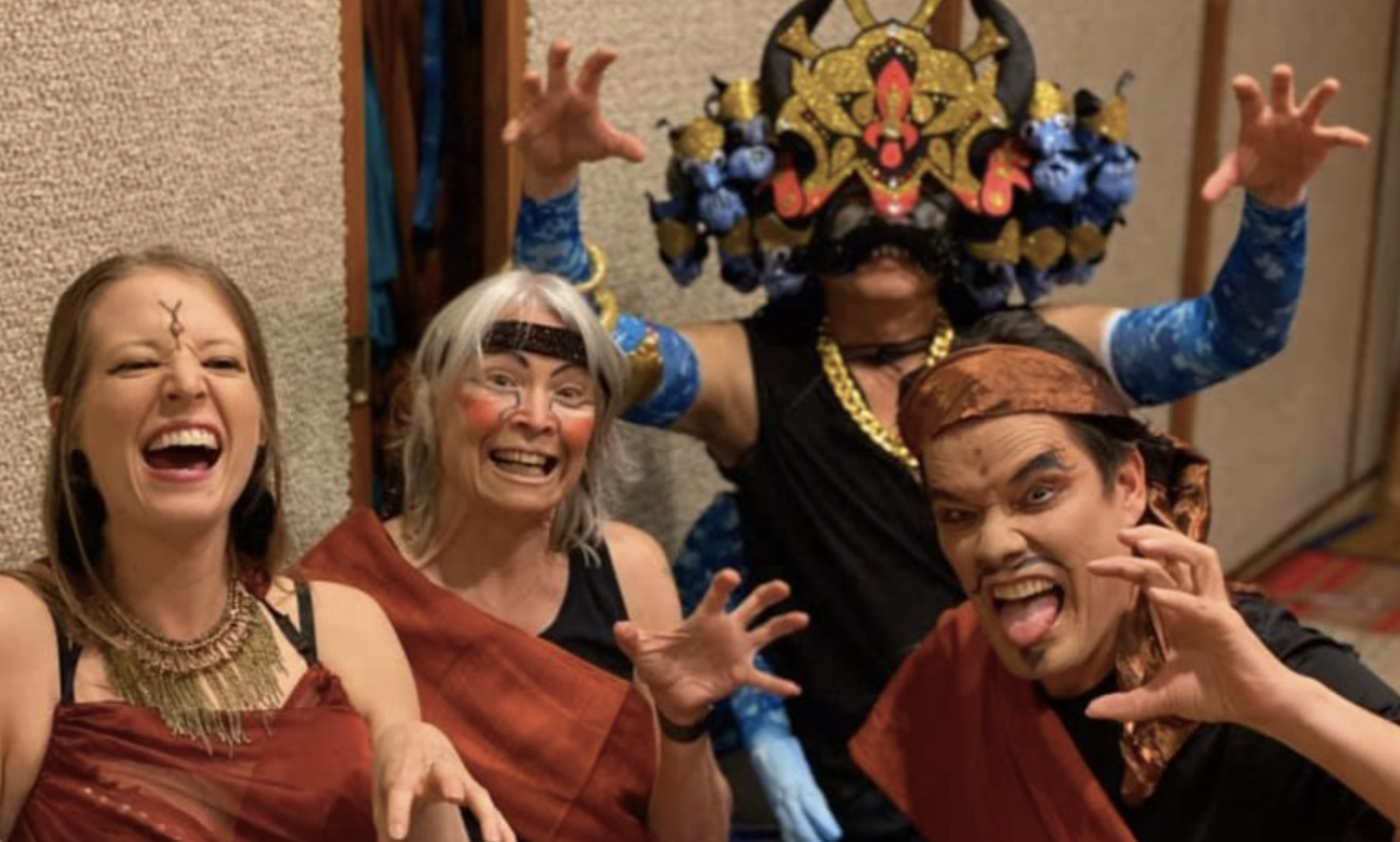 Whew! Check marks on the lead prince and princess roles! Next our tai chi chuan teacher Dr. Wong Kai Ming agreed to go from being Ram’s father the good king last year to playing the dastardly demon king this year. In fact, Dr. Wong seemed to relish the idea of playing a bad guy! Something about his mischievous chuckle spurred me to ask one of our yoga students, an ordained priest named Moki Hina, to be part of the demon horde. Moki promptly enrolled his church friend Dixie in the horde. Where there is light, a shadow is always cast, Moki aphorized.

A lot of other characters, however, really were not showing themselves. I had lunch with Malia Helela, our hula teacher and my 9 year collaborator in pulling off this Diwali thing. We puzzled over many names for the parts we still had to fill. What about Ram’s father, King Dasharatha, who has to carry the longest single scene in the play?

We really hit the jackpot less than 60 seconds later when Al Harrington walked through the door… Was I brave or desperate? ‘Nothing ventured, nothing gained,’ I reasoned and popped the question to a famous television actor. “You know, Al, we do a village storytelling every year of a swashbuckling tale from India called the Ramayana. I call it an ‘enactment’ because nobody has to memorize any lines; people just act out the storyline as the narrator tells the story. (Gulp) Would you like to take a part… I mean, if you had time…?” 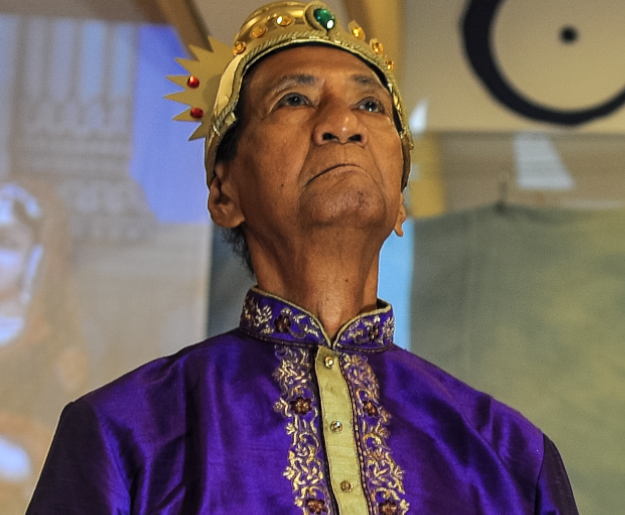 “I’m very honored you would ask me,” replied Al. “I only hope that I could fulfill the role properly, as you have in mind.” Such a humble man, and so honorable. Definitely fit for a king. Ram’s father in fact.

We already had a priest signed on, how about a minister? The king needed a queen, Prince Ram’s stepmother, to play the role of banishing Ram to the forest. So we asked Katharine Harts, our aerial and MELT teacher, who had recently retired from ministering a church in California, to pretend to lose her moral compass by playing Queen Kaikeyi. Like Al, she’s spent tons of time in front of large audiences. I didn’t tell her she’d be playing opposite a TV star, yet she rose – or rather, fell – to the challenge! 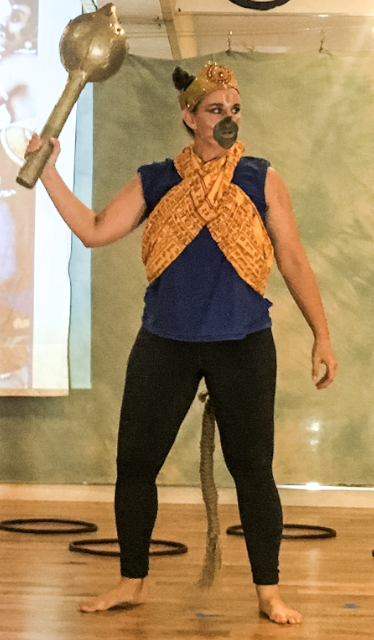 Jennifer Milholen, a dedicated, skilled performer in our Ramayana several times before, came as a natural choice for the noble Hanuman. One after another, all three members of the Jones family tumbled into our cast, with their little boy Kent making a perfect young Ram, his dad playing Princess Sita’s loving father, and his mom Eriko (Still & Moving’s Japanese translator) as a magician/deer. 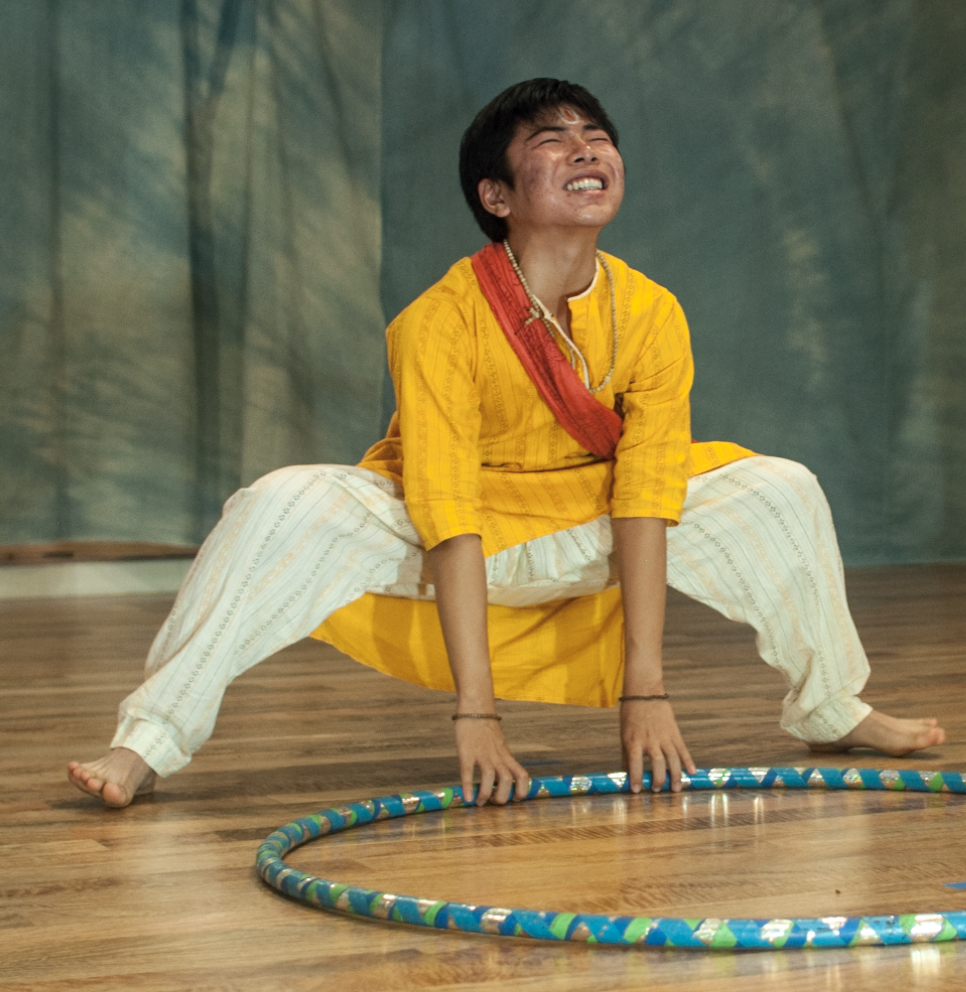 My faithful assistant director Doris Morisaki and I were worrying over our last big hole in the cast, Ram’s brother Prince Lakshman, when a handsome young man entered our lobby, waiting for his mom to finish class. Aha! Like two sea birds intent on a fish below, we dropped in on the unsuspecting Senri Yoshida… and he liked the idea! We had our grown up Lakshman. Ashton Lee soon appeared for the role of young Lakshman, and thus our core cast was formed! 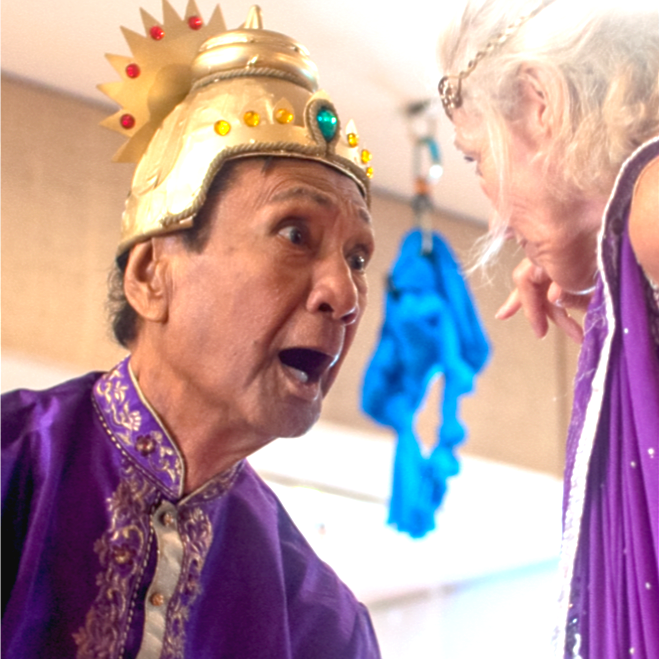 As our rehearsals progressed, I was thrilled to work with so much talent. I told the Ramayana story to Al Harrington at our first practice, and he listened with eyes closed, his face reflecting a myriad of emotions as he imagined his eldest son being ripped away from him by his youngest wife. When we acted out the scene, he broke down completely – as King Dasaratha does in the story. Katharine as Queen Kaikeyi was devilishly convincing in her cunning. On stage, their scene crackled with electricity – both in rehearsal and performance.

Dr. Wong’s research on his character, the demon king Ravana, taught me a couple things about him I had never learned in 40 years of studying the Ramayana – you can see the arrow striking his NAVEL instead of his heart!  Nor have we ever had an actor go to such lengths to create a costume. Dr. Wong crafted a 10-headed demon out of melted water bottles and a hammer-head shark mask, in addition to making 10 arms for himself out of pool “noodles” wearing surgical gloves. Fantastic. Not to mention his laying out the final battle scene using tai chi moves, providing us with a percussion collection for creating sound effects.

The audience loved the walking sun and moon signs that Dr. Wong dreamed up and that Dr. Mark Morisaki, another gifted surgeon-turned-artist, crafted, in addition to a splendid new crown. Good things kept unfolding, and I started to remember that directing plays is one of my very favorite things to do.

Even more light than usual was 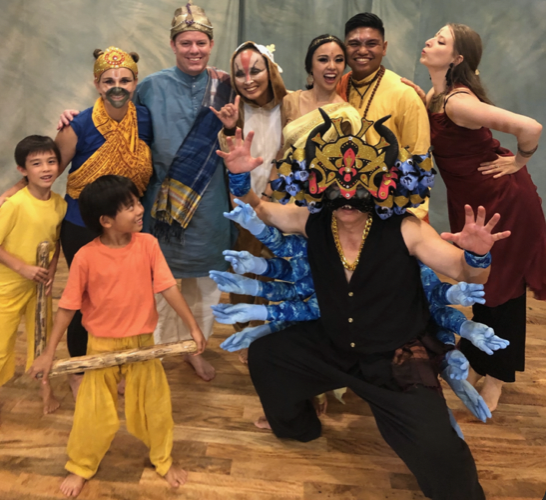 dazzling out of the building by the time we arrived at performance day. Although we never managed to get everyone together before the show itself, almost 60 performers ultimately came to the stage! Between the acting cast, the dancers and keiki aerialists, the ages ranged from 4 to 84. Malia’s three kids, Ilana, Wai’ea and Kai’ehu (the twins with more Ramayana performances under their belts than than anyone other than Malia and I) gave up many precious free-from-school weekend hours to provide our DJ’ing, sound effects and slideshow.

Dozens of other staff members, students, teachers and family members added to the magic of Diwali. Stage-adverse Rosa Harrington filled in many roles during rehearsals. Eva Geueke was finally able to join us for a lovely Sita lament dance. Emily Carr-Hunt and her husband David live-streamed our performance on Facebook for the first time! Shilpa Rathi, whose little girl was our youngest aerialist, provided clothing for our young princess from her store, Island HOLI.

I can’t tell you all the sparkling moments that delighted me, but here are a few. 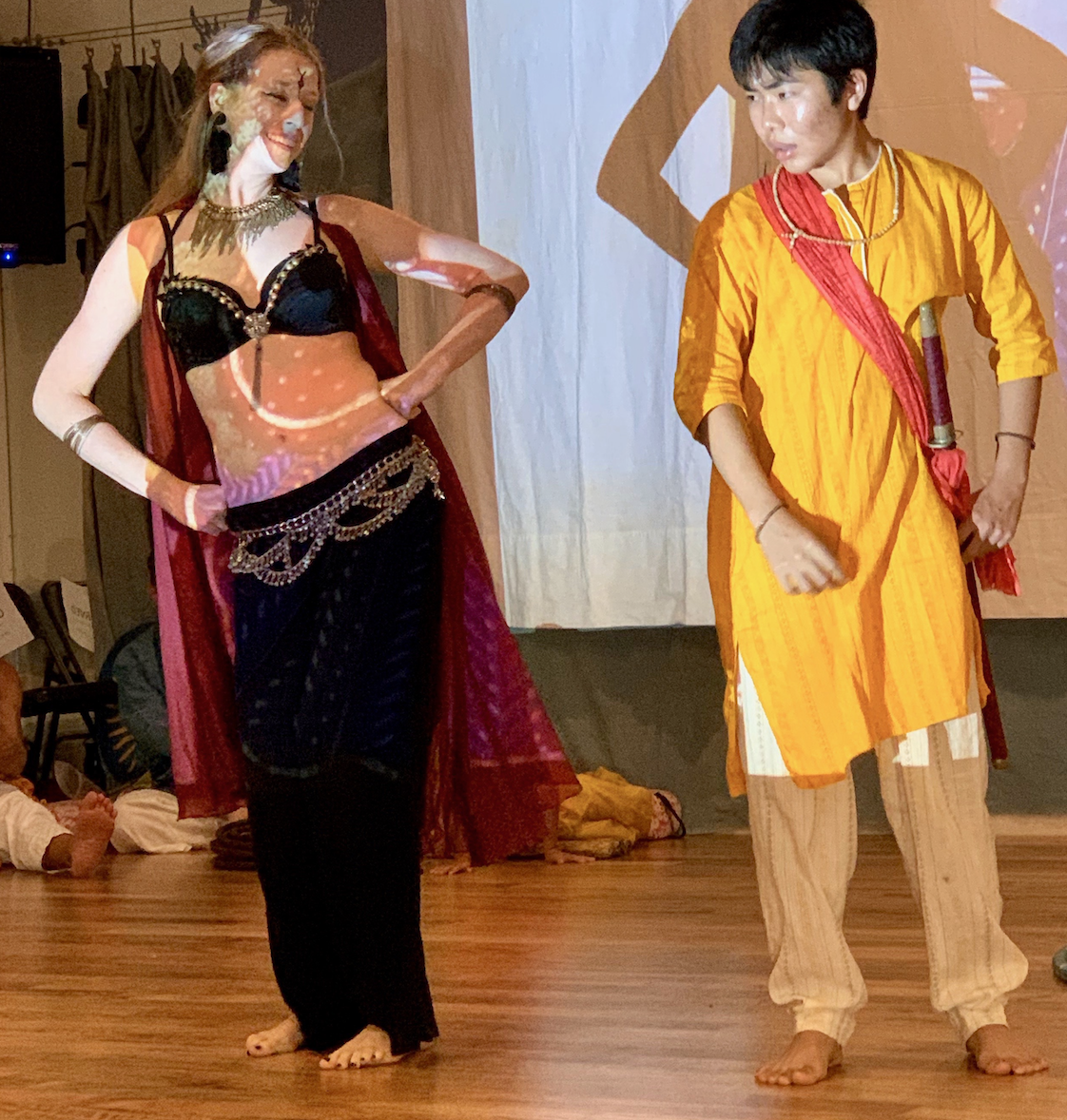 Laurel Pikunas – playing the part of the demon princess who unsuccessfully tries to seduce both Prince Ram and Prince Lakshman – thoroughly succeeded in charming her audience with her tippy-toe travels between one brother to the next, hips swinging and eyelashes batting. Afterwards, she gave full credit for her talented acting to our belly dance teacher Murat, who has taught her to be comfortable in her body, expressing herself.

Before the show, I had talked to new student Glady Lopez, only to discover that in her entire life, she had never performed, and she had only taken four belly dance classes from Samantha Giridhar. Yet once Gladys debuted on stage in a duet with her talented teacher, she was perfectly lovely! 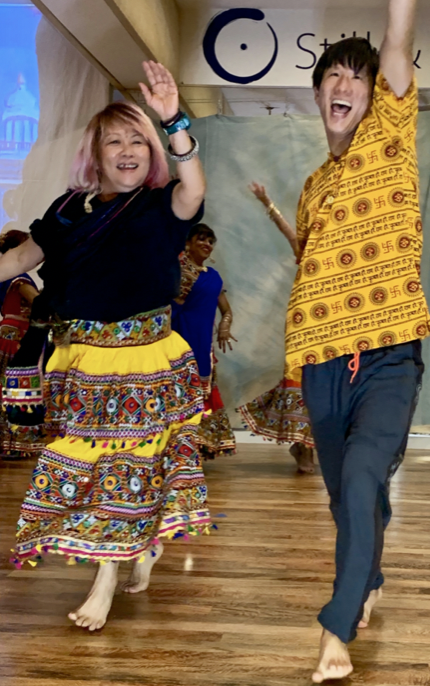 Miss Willow Chang’s Bollywood brilliant choreography featured her long-standing, polished dancers in front with her, then opened up to form a corridor for each of her beautifully costumed performers to dance through, two at a time, toward the audience. She honored each student, from the least to the most experienced dancer, with a moment in the limelight. And they all shone. I loved the joyous exuberance of her sole male dancer, Michael Dunn.

The keiki aerialists hit such great lines in the air after only 5 weeks training with Katharine Harts, I can’t wait to see how their talents will unfold at Merry & Bright in December!

I had never seen our Japanese translator’s fun-filled side until Eriko mysteriously wrapped herself in her magician’s cape to connive with the demon king, and then transformed herself into a heart-winning deer prancing before our very eyes. 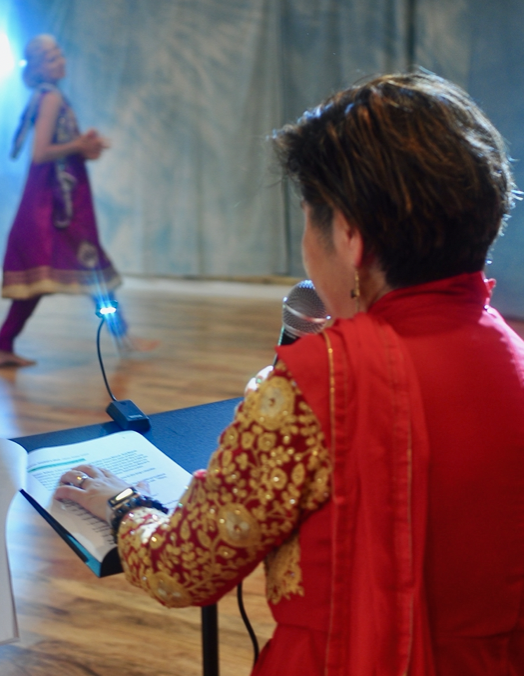 Doris carried the narration so beautifully and dramatically, I knew I had made the right decision in forsaking that role myself to be free to direct. Her voice seemed to be spilling right out of the mouths of some of the characters.

Jen so earnestly played Hanuman, it seemed as if she almost COULD fly across the sea to find Princess Sita, if will power alone were enough to defy gravity.

Zeny Ogriseg’s singing and chanting in Sanskrit, self-accompanied on the harmonium served to meld the entire performance together with a very sacred feeling, as did the sages and yogis performing their devotions. Our monkeys and demons provided comic relief. 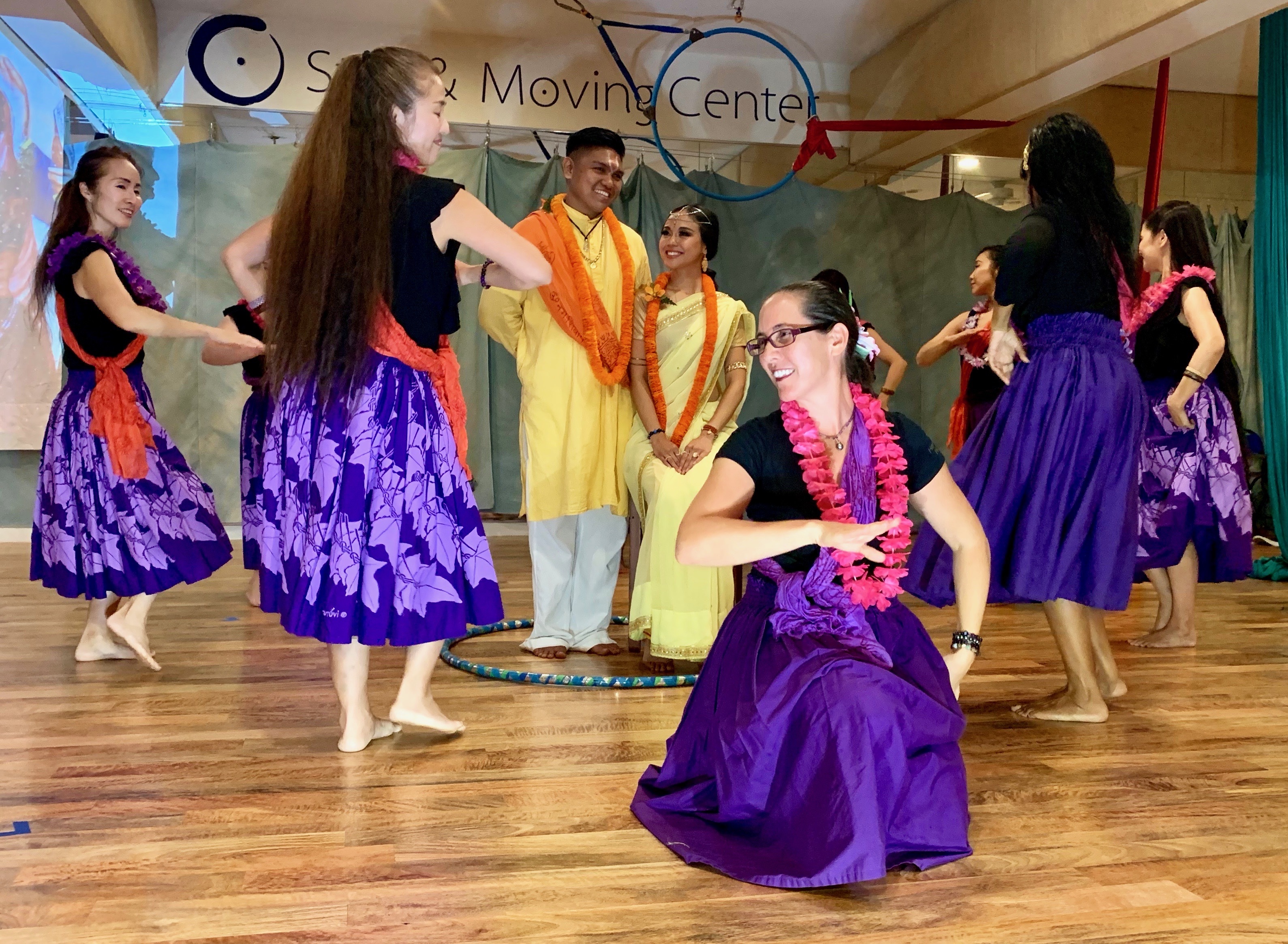 First timers to the stage as they were, Ram and Sita easily portrayed their affection for each other, feeling that way in real life. Clyde, as a military man, carried himself with the natural dignity and honor befitting a prince. Regal in battle. Charlene slipped into the role of a beautiful and beleaguered princess as if she’d spent her whole life grooming for it, allowing her imagination to take her wherever the storyline led: torn from her husband by a demon, confined and alone until Ram managed to find and rescue her. Sita’s grace under pressure astonished me. Charlene had simply turned into Sita.

Charlene told me afterwards that she had never felt so much collective love directed at her as when all Malia’s hula ladies surrounded her and and Clyde for their wedding dance. And the audience cheered with authentic joy as Ram and Sita finally made it back to Ayodhya to be crowned king and queen. Everyone joined in, “Jai Sita! Jai Ram!” We had created an undeniable feeling of community.

View our full 2019 Diwali program with all cast and crew here.

Several of the actors didn’t even want to go home after Diwali. They wanted to keep floating, and I’m still flying high! Want to guess what Clyde’s last name, Bagaoisan, translates to in the Philippines? “To grow wings”. Of course. Our lead actor’s name means to grow wings… to soar!