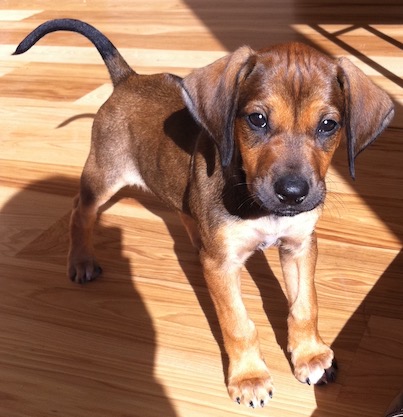 An irresistible puppy came into my brother’s life at a really low point, and she quickly took him on as her life project.Arriving terrified from the hold of a plane, only 6 weeks old, Bella had a bit of a rough start in life herself about 8 years ago. Todd’s kids cleaned her up in a sink, smothered her with love, and gave her to Todd as the surprise Christmas present of all Christmas presents.It’s not that Todd hadn’t had dogs before, it’s just that none of them GOT Todd the way Bella did. From her Rhodesian Ridgeback side, her keen vision and hearing – like Todd’s – made life just a little too bright and a little too loud for her. She knew what it was to suffer.Another thing they shared was penetrating intelligence. Often alone in a huge house, Todd engaged Bella in sophisticated conversation from their morning wake-up romp, to telling her about his upcoming workday, to discussing her walk, food and friend visits when he got home at night. 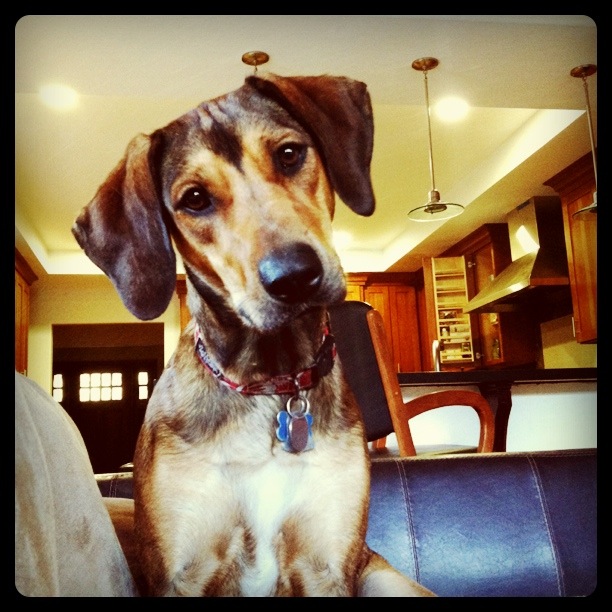 When Todd spoke directly to Bella, she would cock her head at 30 degrees, listening intently. As she contemplated his questions – such as “Who took you for a walk this morning?” – her eyebrows would move up and down, her eyes looking into the distance, seeking. As soon as he provided the right answer – “Did Tina take you for a walk?” – her eyebrows would come to a standstill and her gaze would snap back into clear focus for “Yes! I walked with Tina!”She understood hundreds of words and phrases and recognized the names of more than a dozen people when Todd talked about them. She’d get confused (bouncing eyebrows) when Todd would mention one of the two Scott’s in their lives, until Todd would clarify his reference, saying “Julia’s Scott” or “biking Scott”, and she would brighten up with recognition. 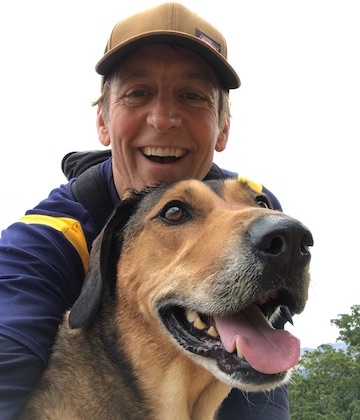 As it turned out, Todd and Bella also shared a natural hankering for exercise. Bella was the perfect dog for an outdoor guy with tons of energy. From puppyhood, Todd trained her like an athlete, taking her on longer and longer hikes and bike rides – he’d bike; she’d run! He kept an eagle eye on her for signs of heat or dehydration, water her down, and she’d be good to go again. She could eventually press through a 2 hour workout with Todd in summer temperatures.Whenever Todd prepared to go on a bike ride, she would eye him intently to see which outfit he would wear. If he put on his road bike shoes, she hung her head and walked away in disappointment. If she saw him don his mountain bike jersey, she would dance with excitement about their upcoming adventure together. 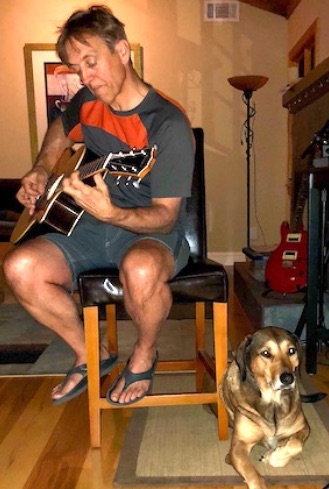 Bella’s sensitivity – like his – was extremely acute. A physician, Todd often intuits his patients’ needs. Once Todd sneaked off to do a mountain bike ride up Mount Diablo, where dogs are forbidden. When he came back, bruised from a fall on the trail, he hid his bike in the garage, showered and changed before seeing Bella. She immediately began sniffing the bruised spot on his leg covered by his long jeans. They kept no secrets from each other.When his kids first gifted Todd with Bella, he was feeling lonely and devastated from a recent divorce. He had no energy for developing new human relationships. With the puppy, however, he felt safe. She licked him up into her heart and never let him go, allowing Todd to feel love again.Todd says Bella saw the very worst of him, and absorbed with her expansiveness all the pain that he was going through, never for a moment wavering in her steadfast devotion to him. 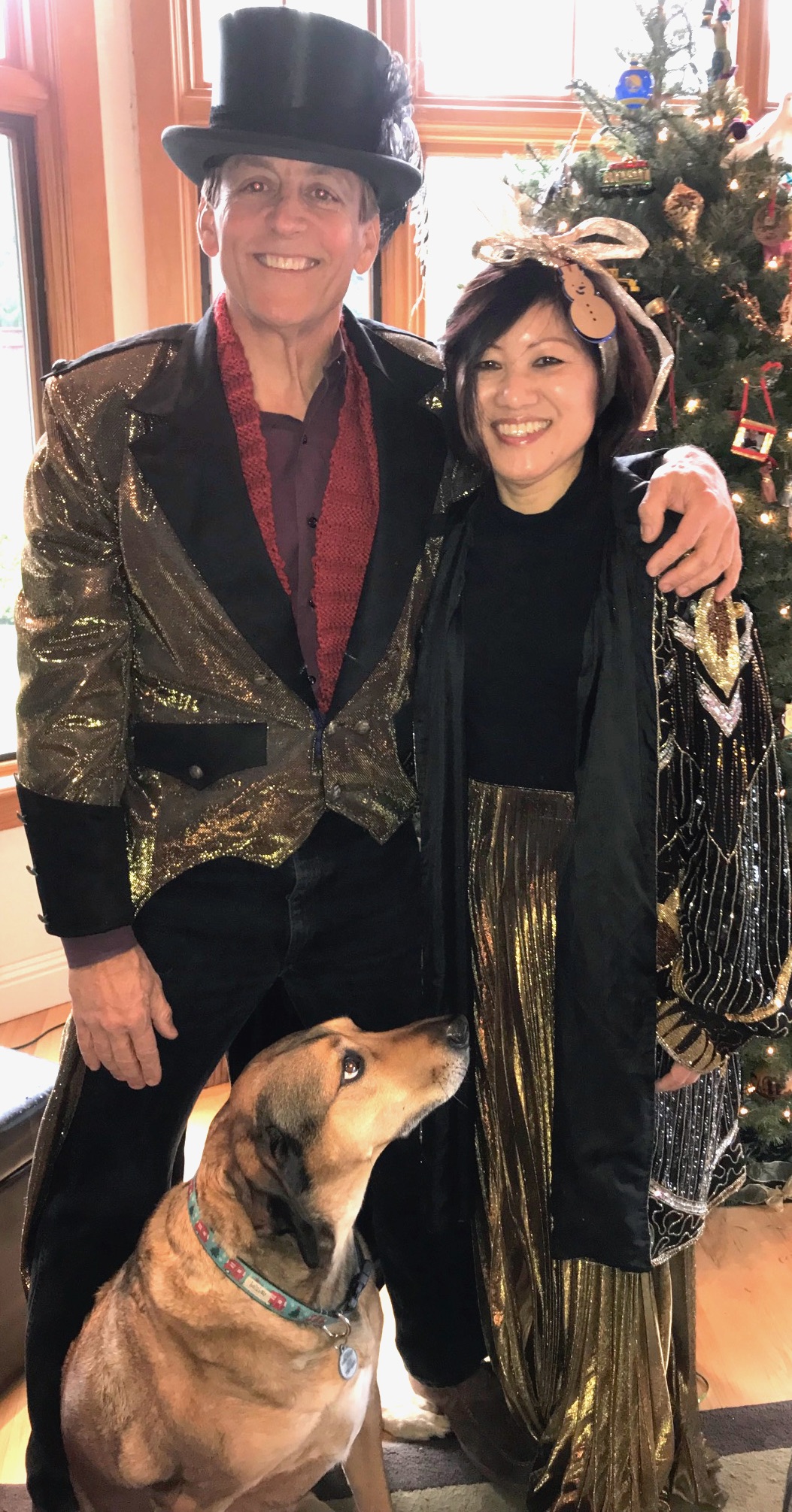 In fact, Bella was responsible for Todd meeting Tina, owner of the friendly local dog shop in his town. Rhodesian ridgebacks often display aloofness and suspicion of strangers – which Todd shared, especially in regard to women at that stage of his life.Eventually, Bella brought Tina more definitively into Todd’s life when she (Bella) developed a malignant tumor below her eye. Tina, determined to find ways to make this dear hound as healthy and comfortable as possible, came to the house daily to care for her. Oh, and yes, Todd was there, too. Bella’s two human caretakers got to know each other on a deeper level… which Todd was now ready for, thanks to Bella.For a while, a mushroom-based treatment that Tina found actually shrank the tumor down. Eventually, though, the disease won out, and it became difficult for Bella to breathe or eat. They had to feed her with a spoon. As Todd’s elder daughter – a farmer – observed, “You can see in an animal’s eyes when it is ready to die. And Bella was ready.” 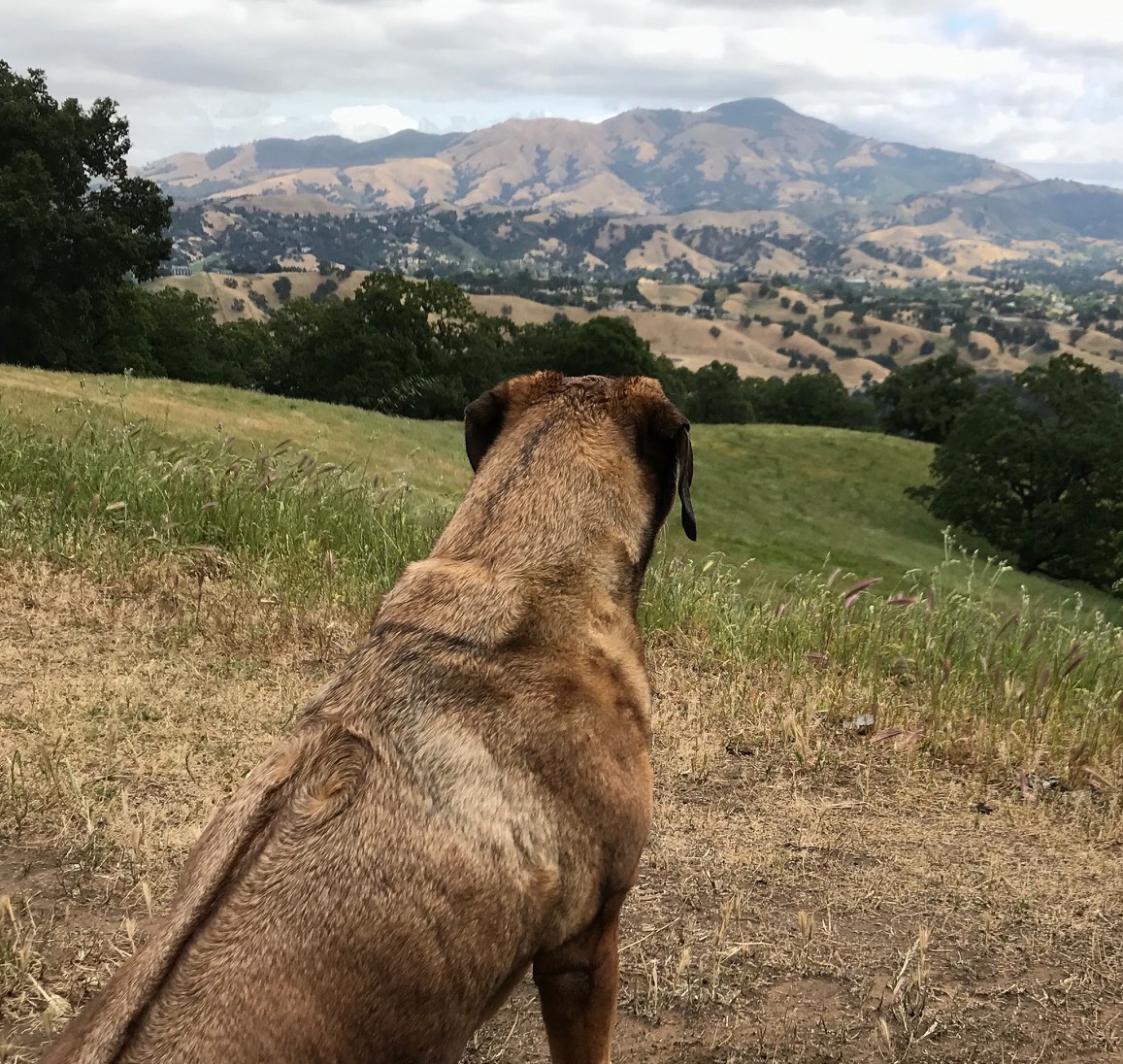 Up until 3 weeks before Todd had the vet put Bella to sleep, she’d still get the joy “zoomies”, racing around, frolicking in her exuberance for life. In this, she was a resilient buoy in Todd’s sometimes melancholy sea. On the day before the vet came to the house, Todd took his beloved companion out for a last walk, letting her go wherever she pleased, and she chose a 6 mile hike up into the backcountry, returning exhausted and exhilarated. She didn’t want him too sad about their imminent parting. She had given him her best, with joy, faithfulness and unflagging love.Rhodesian ridgebacks, it’s said, need an owner with a firm, attentive hand, which she got from Todd’s training, both athletically and intellectually. Sometimes, though, the line between teacher and student blurs…Bella had joined Todd years ago in the practice of doing a morning meditation out by the pool. Long after he got out of the habit, Bella continued her daybreak contemplation out in the backyard, gazing protectively into the house. Now that she’s buried near the spot where she sat each morning, Todd figures he should return to his morning devotions, taking back up where Bella left off. Bella’s life lessons continue to help him to find center.