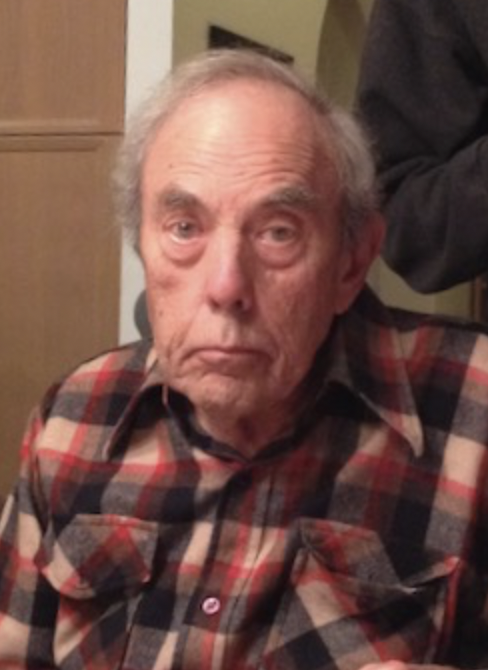 Remember my often-grumpy step-father-in-love Bob – the one I call Eeyore? Well, things got worse. But hang on for the ride.

Not being able or allowed to drive can be a game-changer for many older folks. It’s such a symbolic and actual impediment to independence. Especially for men of Bob’s generation – he just turned 92 – it seems to deal a devastating blow to their sense of identity. Bob’s not one to be thwarted by a wounded ego, however.

All of us in the family had been fretting over Bob’s safety on the road, yet unable to convince him to give up the keys after some vehement conversations. He remembers himself as an excellent driver with a clean record – which used to be true…. However, after a number of close-calls and fender-benders in the years surrounding the death of his dear wife Sue, the State of California finally saw fit to take Bob’s license. Dismaying as that may have been for Bob, the rest of us heaved huge sighs of relief.

Our son Shankar solicitously made arrangements with a local Lift driver to regularly take his grandpa wherever he needed to go. Yes! Great solution!

THAT didn’t last long. The driver was “too expensive”, didn’t have the “right attitude”, didn’t come when Bob needed him, and so on.

The next thing we knew, Bob was 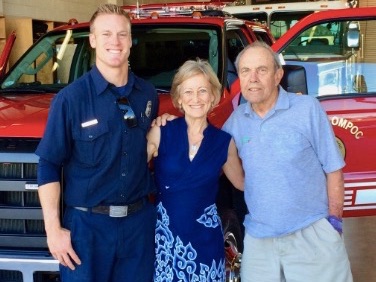 driving himself again. Oh my gosh. It was so scary when he took himself up the coast on a three hour round-trip drive one day. Shankar even used his position as a firefighter to convince his fellow defenders of the public safety at the Sheriff’s department to keep an eye open for his grandpa’s car, giving them the license plate number and Bob’s address at the retirement home. But no success catching this wily coyote!

Eventually Bob collided with a parked car, and his own got towed away for good. None of us shed a tear, I assure you!

No license? No car? No problem!  Bob got his lunch & beer buddy to help him buy a new minivan. You think I’m kidding?! Nope. These two old schemers were like straight out of the movies. With cold cash in one guy’s hand and a legit driver’s license in the other guy’s wallet to drive the van off the lot, the car dealership didn’t give 3 figs that the buyer didn’t possess a driver’s license himself. And Bob was back on the streets again.

Bob’s been driving that van ever since, accumulating little dings and scrapes in the first few weeks. He basically only drives a couple miles a day, thank goodness. 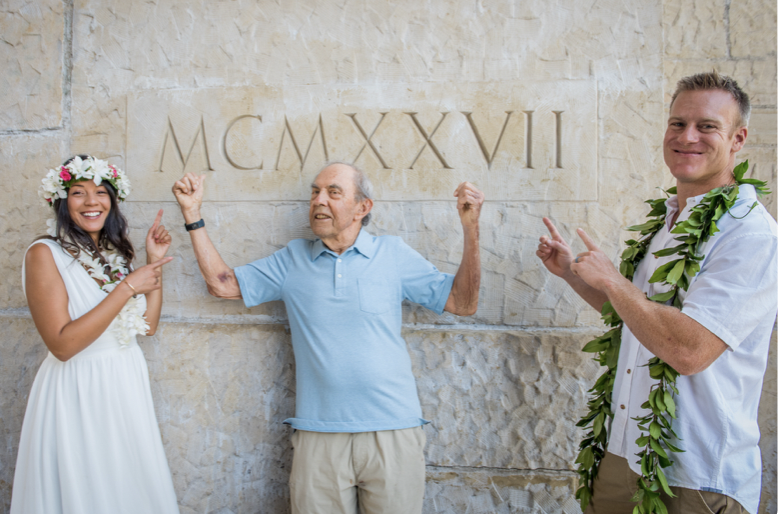 However, something else really big changed in Bob’s life: Shankar finally took his grandfather’s sage advice and proposed to the love of his life, the darling DD. And I don’t really know which of the three of them was more delighted with the engagement!

Folks expect a radiant bride at a wedding. At Shankar and DD’s ceremony, I heard that… AND how people couldn’t remember ever seeing Grandpa Bob so happy. He just glowed as she was officially wedded into our family.

Shankar and DD live in Bob’s old house. Bob sleeps in his room in a retirement community nearby, then comes over to the house every morning after breakfast. I sometimes forget what a capable man Bob has been over his lifetime, as a scientist, inventor, boat owner, businessman and home builder. Shankar has never before held the responsibility of caring for a house and garden, and Grandpa Bob is right there at his side, directing Shankar’s fledgling yard projects and repair jobs. Bob’s kind of a walking, talking operating manual that comes with the house. 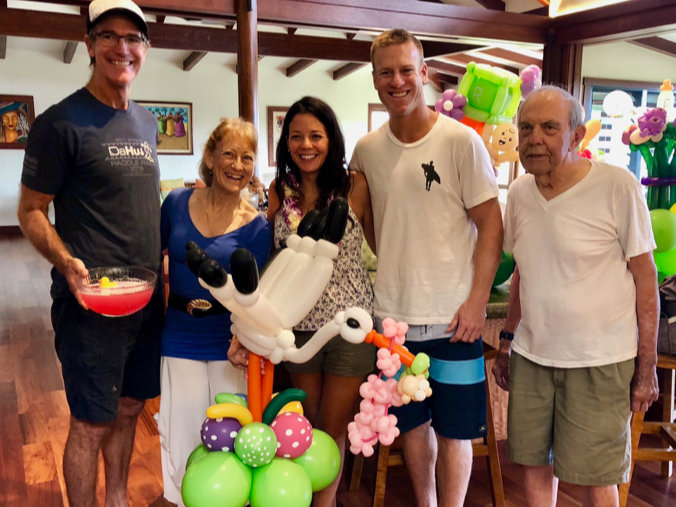 Now, some brides might get a bit pushed out of shape with a crotchety old duffer coming through the garage door every morning. Not DD. She grew up with an unmarried aunty staying with their family, helping out with the kids. Ohana is normal for her, and DD loves Grandpa Bob. She thinks he’s funny. For her, he’s just part of the whole family package. Her gentle twinkle puts Bob at ease, smoothing his rumpled, odd-duck feathers.

And it just keeps getting better.

First it was the kids’ two loveable puppies who were stretching Bob’s heart while they chewed on his shoes. A few months ago, the stork delivered a mini DD to the household: baby Coral Rae. Bob was as proud as if he had just hatched an egg himself! 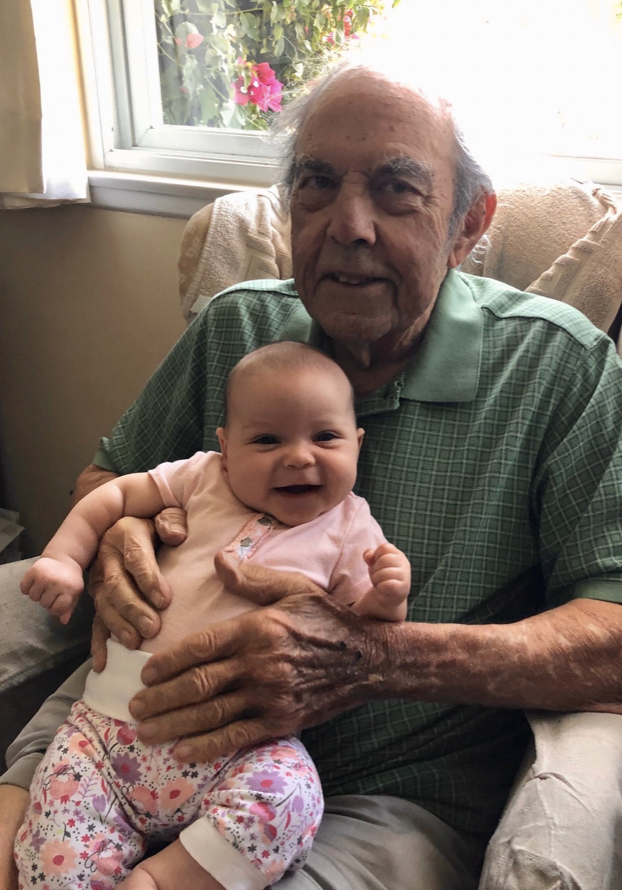 Little Coral Rae and her Great-grandpa Bob are quite a number. He’ll tickle her toes while she coos, and talk with her in her baby seat while she fusses until DD comes to feed her. Last time I asked Bob over the phone what he did that morning, he nonchalantly told me, “Oh, Shankar and I played with Coral.”  Growing up as an only child himself, not getting married to Sue until he was 50, and never fathering his own children, Bob probably spent some lonely years. I think he’s now, at age 92, finally living in the family he always wanted. It’s wonderful.

And guess what? Miracles do happen – sometimes unfortunately… Bob convinced the DMV to let him take the exam again. His nervous system must really have settled down: he passed the test and got back his driver’s license. What’s a family to do? Wrestle him to the ground to take the keys? Or pray that everyone’s guardian angels are on active duty!

So, if you’re ever on the streets of Goleta, California, keep a sharp eye out for a blue Toyota Sienna minivan legally driven by a devoted great-grandfather, puttering over to see his kids….