How often do we encounter someone who really does not act from the standpoint of the ego? Rarely, right?

As we approach Mahatma Gandhi’s 150th birthday in 2019, I’d like to tell you about Shashi Tiagi from India, a living, breathing, working Gandhian whom our family is privile ged to know and to have recently spent time with.  We call her Shashiji, adding the respectful “ji” to the end of her name.

I can imagine that in her moments of doubt, she asks herself not, “What’s best for me?” but something along the lines of Gandhi’s suggestion below. 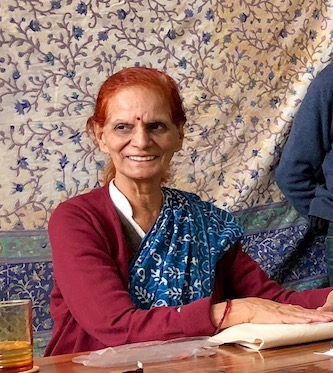 A slight woman wrapped in a faded blue and white cotton sari, with serviceable pink tennis shoes, Shashiji wears a single red plastic bangle on her wrist, scratched by hard work and desert sand. The holes in her earlobes, beneath her home-dyed henna hair, have long grown over since the passing of her younger days of gold earrings. Her dark eyes miss nothing, bright, perceptive, warm at their depth.

As a young woman, her family chose a husband for her with the right credentials per their respective families, and Shashi agreed to the match. She soon came to learn that her husband – Tiagiji – was involved in the Bhoodan Movement, started by one of Gandhi’s most effective devotees, Vinoba Bhave.

The plight of India’s rural poor – working for nearly nothing as virtual slaves to the landowners of the time – greatly concerned this compassionate man, Bhave. Shashiji tells us of the first meeting Bhave convened with some wealthy landowners. He went straight to their hearts, saying, “If you have 4 sons, think of me as your 5th son. Whatever land you would give as an inheritance to your 5th son, give it to me. I will distribute to the poor farmers of your community who are struggling to barely feed their families.”  The room went quiet until one landowner stood up, taking all by surprise.

“Vinobaji,” he said, “I will take you as my 5th son. Here is my gift: At dawn tomorrow, come to my land and begin walking. Keep walking all day. Whatever land you walk upon between sunrise and sundown, that land I will give to you on behalf of the farmers.”  Bhave accepted the offer, walking over 80 acres of his land the next day. With that generous gift for the poor, the Bhoodan Land Gift Movement commenced.  Within 13 years, Bhave “owned” more land than any other person on earth – though he continued to walk in sandals, loincloth and a shawl, without any personal possessions, giving every inch of the land away.

Shashiji mentions her parents’ worry when they learned that her new husband was connected with Bhave. To be associated with such a movement, Shashi and her husband were going to have to live like the poor themselves – as Gandhi had done and Vinoba Bhave continued to do. All her nice saris and gold jewelry – where Indian families generally stored their wealth – would be given away to feed the poor. They would live without luxury or convenience. This Shashi did, as a devoted wife and as a person of conscience.  We can imagine her as young bride discovering the harsh life style in front of her – though we have never heard a word of complaint from her.

Following in Bhave’s footsteps, Shashiji and her husband L. C. Tiagi, or fondly known as Tiagiji, carried out their own arm of the Gandhian campaign to gather land for the poor. They were particularly drawn to the Thar desert of Rajisthan. There the farmer families could barely eke a living where there was only a possibility of rain one month of the year, and whatever water they managed to catch had to last them the remaining 11 months. The scattered community of about 50,000 inhabitants had no access to healthcare and no schools.

As a college graduate, Shashiji created a school for the children. Her husband set out to help the desert villagers more effectively catch and sequester water. Here women often died in childbirth, girls were treated as property, the “untouchable” cast had no rights, and workers in the mines died young of lung disease. In 1983, the Tiagis founded a nonprofit organization called GRAVIS near Jodhpur to address the pressing needs of their struggling brothers and sisters on the Thar desert. See their website here.

Shashiji tells of a time near the beginning of their efforts when the wealthier people resented the help and empowerment the Tiagis and their co-workers were bringing to the underprivileged. Some teenage sons of the rich people took it upon themselves to break into their simple huts, stole or destroyed whatever they found and smashed their roofs. This continued for 4 nights – with the GRAVIS people never responding in kind – before the police finally stopped the young marauders.

Another time as Shashiji and her husband took different paths through the town, Shashiji looked back and saw a young man with a knife approaching her husband. Without a moment’s hesitation, Shashiji ran up to the youth and grabbed his arm, refusing to let go while he held the knife. When the police intervened, she and her husband refused to press charges. The young man was ashamed of himself, and what he had contemplated doing to these good-hearted people. He changed his life. 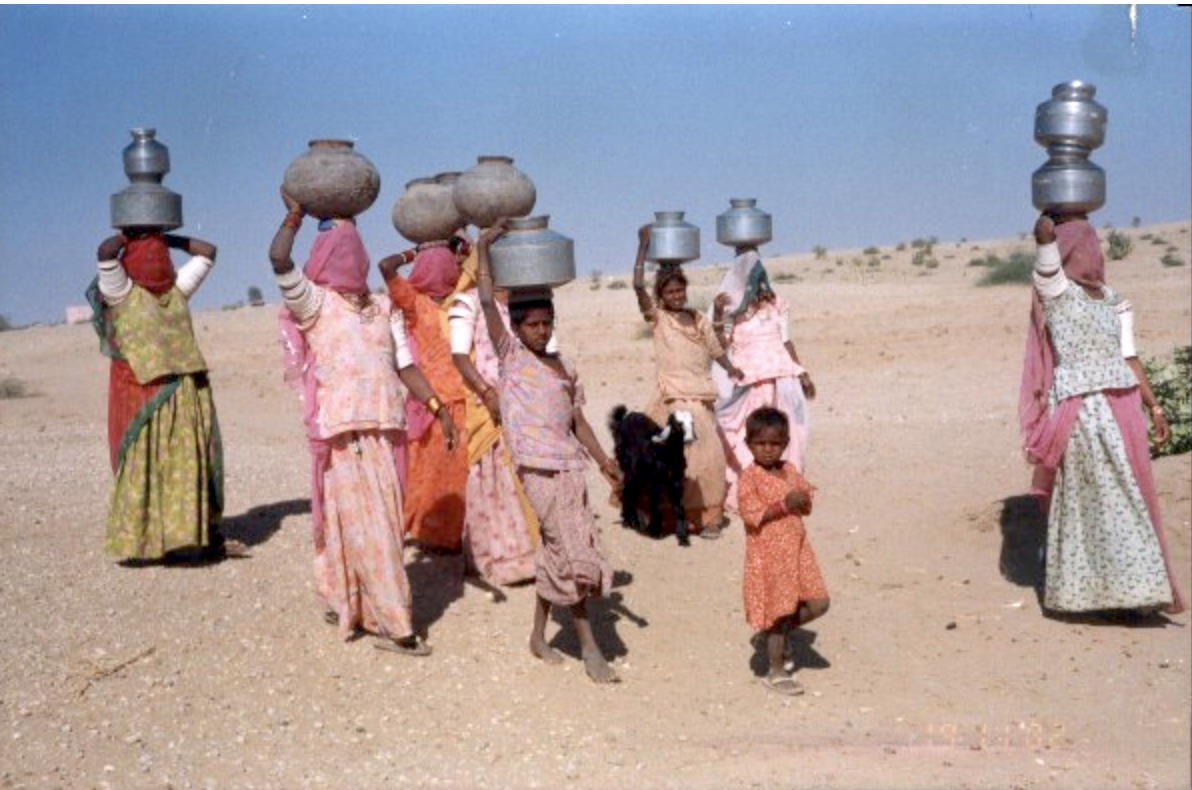 Life on the desert is hard on women in any case. Walking to collect water can consume many of the waking hours of a woman’s day. One day, Shashji and a co-worker met a village woman and asked about the bruises on her face, which the women explained as having come from a fall. However, when they left woman’s house together to collect water, the woman unfolded the true story of how her husband mistreated her.  Later the husband later came to Tiagiji to complain that Shashiji and her co-worker were corrupting his wife and turning her against him. Tiagiji asked the man how long he had been married. Eleven years, the man replied. “Eleven years!” cried  Tiagiji , “And yet in eleven years you have not won your wife’s trust as these two women have in a day?!? They have succeeded where you have failed.” The man bowed his head and conceded that Tiagiji was right. From then on, he gave his wife freedoms that other women did not enjoy, and she became one of GRAVIS’s workers herself, with her husband’s blessing. 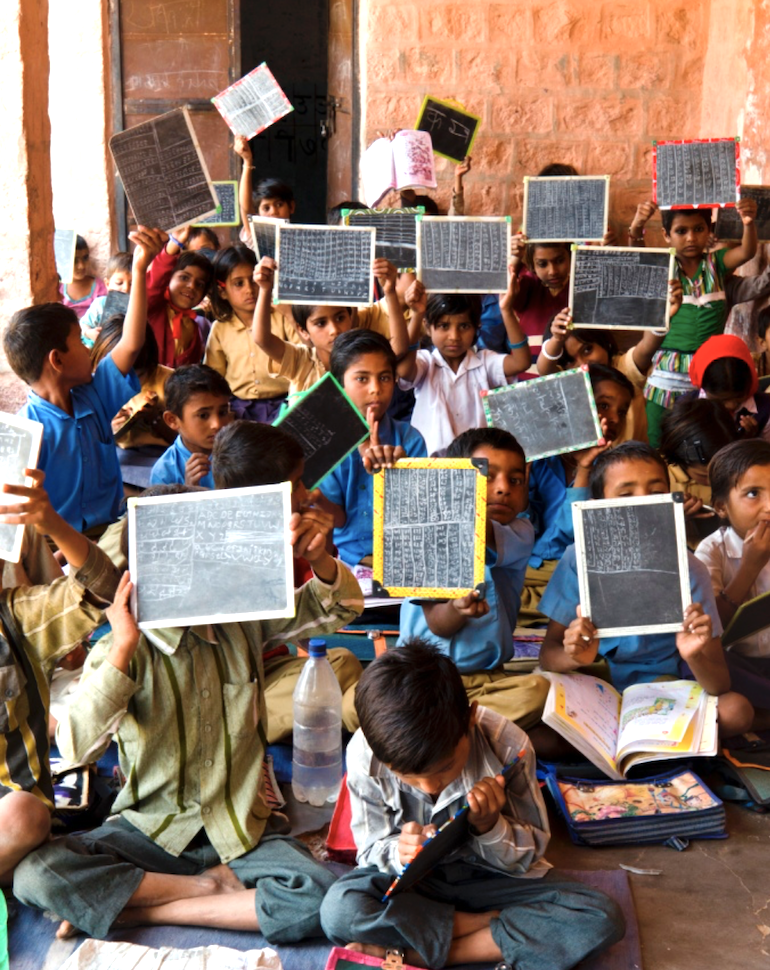 GRAVIS has done enormous good over the past 35 years, creating 98 schools, building a hospital, getting higher educations for some of the village boys and even girls, helping to secure water rights, and now serving 1.5 million people.

Our family came to know Shashji 11 years ago when our daughter Sandhya did a internship during her junior year of college. In an eye and heart opening few months, Sandhya learned a lot about service from Shashiji and her son, lived a simple lifestyle, and helped to further GRAVIS’ efforts to help the rural poor.  Sandhya and I later invited Shashiji to California to help us lead a weeklong Gandhian retreat on sustainability.

Just recently we all had the chance to reunite with Shashji where she was being interviewed at the Metta Institute in Petaluma, California. Shashiji and Sandhya then spoke to a class of at-risk youth about the work GRAVIS is doing to improve people’s lives on the Thar desert. The American kids were especially interested to hear about the child marriages GRAVIS had helped to prevent. 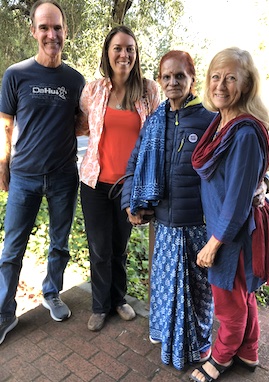 Before Shashiji flew back to India to resume her work, Sandhya, Cliff and i spoke with her about the idea of bringing fat tire bikes to the desert to make it easier for girls and women to gather water. Cliff was particularly wondering how to convince the mine owners in the desert to improve their drilling practices to protect their workers from lung disease. No challenge seems too daunting to Shashiji. We said goodbye feeling so privileged to have spent precious time again with Shashi Tiagi, this strong, humble crusader, for the less fortunate of the world.