Mālia and I agree that we may never again in our lifetimes experience hula performed at such a high caliber, on such deep underpinnings as to what it all means. The costumes, the sheer numbers of dancers presenting such powerful, complex, fast choreography, the incredible variety of chanting styles, the artistry… absolutely over the top. 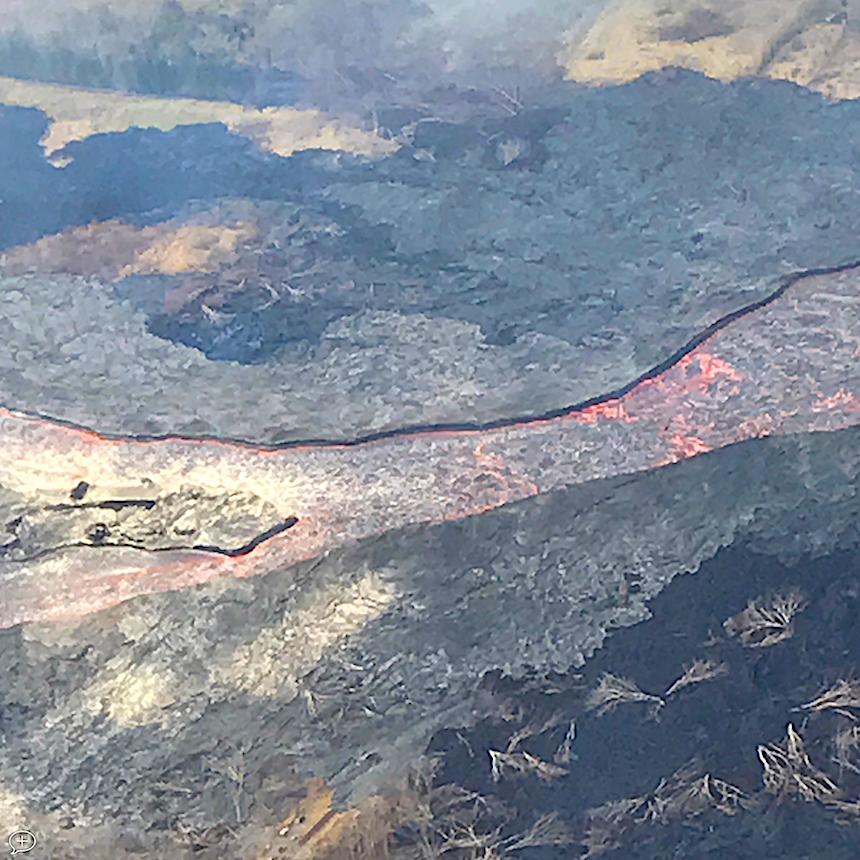 The people who put on the 5th (and final) World Hula conference in Hilo on the island of Hawai’i have a profound understanding of what’s behind hula, and an incredible generosity of heart in sharing it. Throughout the conference, the hula descendants of Aunty Edith Kanaka’ole and their hula school, Hālau O Kekuhi, shared their learning with us as profusely as Madame Pele’s contemporaneous lava flows.

We were fortunate to spend one anahulu – a 10 day Hawaiian week – with 900 other participants at the conference. Along with our field trips on this VERY LIVING island that is growing by acres a day, we enjoyed opportunities galore, experiencing hula combined with the elements of nature we were chanting and dancing about.

To give us a sense of place on the evening before the conference, Mālia drove us up Mauna Kea, a magnificent, dormant volcano from which we got a tremendous view of the sunset. This vast mountain rises up 33,000 feet from the seafloor! Our tiny – yet important to us – presence within such a grand vista signified to me something of the magnitude of attending this last-of-its-kind conference. 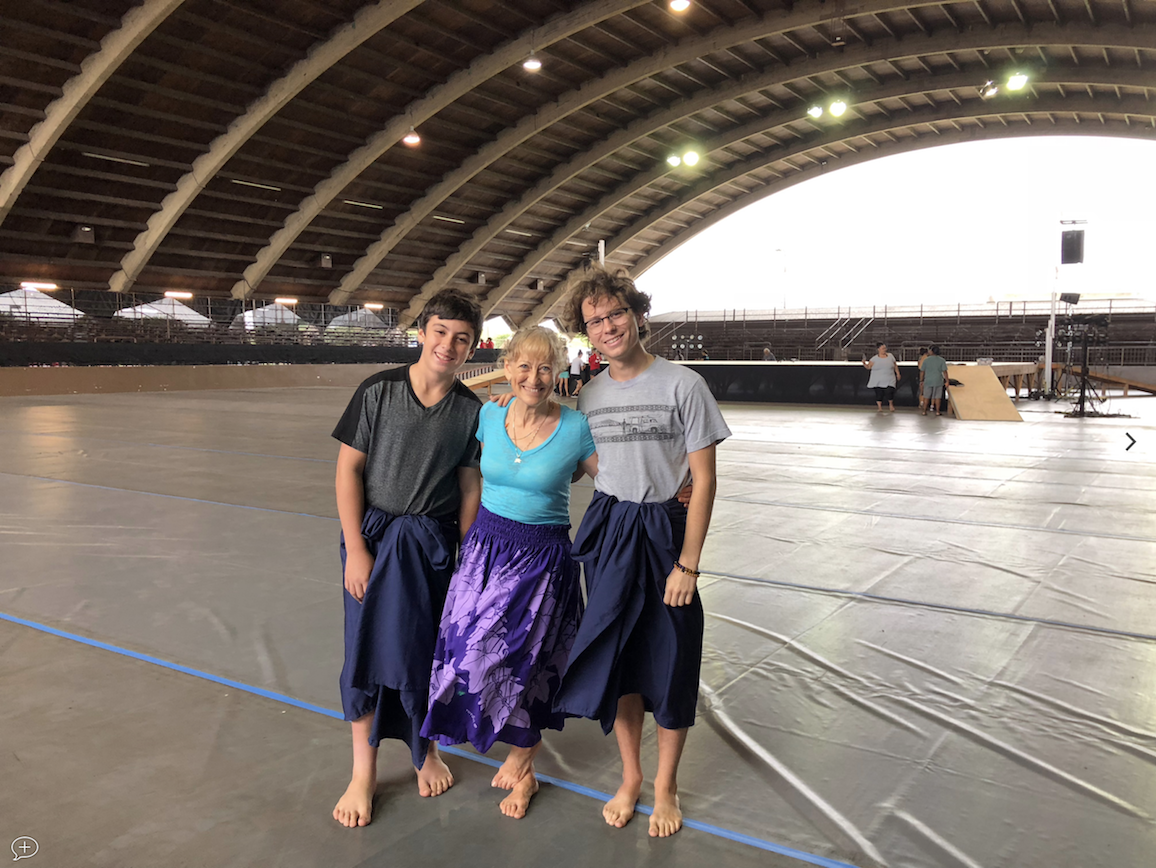 Arriving at the Edith Kanaka’ole Stadium for our first practice for the opening ceremony felt overwhelming, partly because it spans the size of an airplane hangar and partly because it hosts the Merrie Monarch Hula Festival every year. With Kumu Mālia were her 13-year-old sons Waiea and Kaiehu, fellow hula students Kai’olena (Elaina Malm) and Ka’ike (Alex Miller), plus myself – a merry little band of six ourselves!

hula with us. They, with their associated kumu hula and students, presented us with many dozens of workshops on hula and related Hawaiian culture, history and language, as well as field trips all over the island of Hawai’i. The giving never stopped. The hula they danced and the oli they chanted, so far from light-duty tourist performances, were rich, intense, breath-taking and sacred.

For months, I had been steeling myself for the possibility of not qualifying to participate in the opening ceremony, yet I committed to doing my best to prepare for it. By the end of two extra days of practicing the Hawaiian chants and hula dances for the opening ceremony, I was a big knot of aches and pains, especially from the literally derrière-kicking squat turns that we danced to enter the stadium on the concrete floor, in addition to kneeling on the same surface for our ipudrum hula. 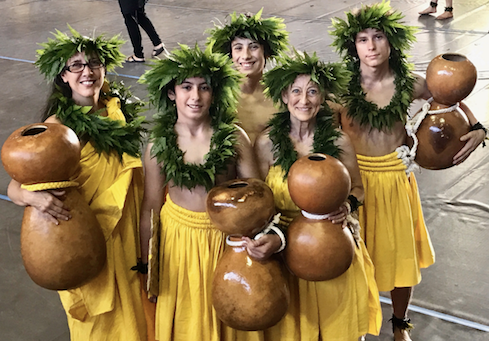 My strong attempts at memorizing the chants were less than 100% successful, although I made great strides in understanding what they meant. So I was quite nervous going into the final rehearsal on Saturday, knowing that Keali’i Reichel might again walk through the group inspecting our lips for accuracy. To my huge relief, I made it through the rehearsal and was allowed a place in the next day’s ceremony. 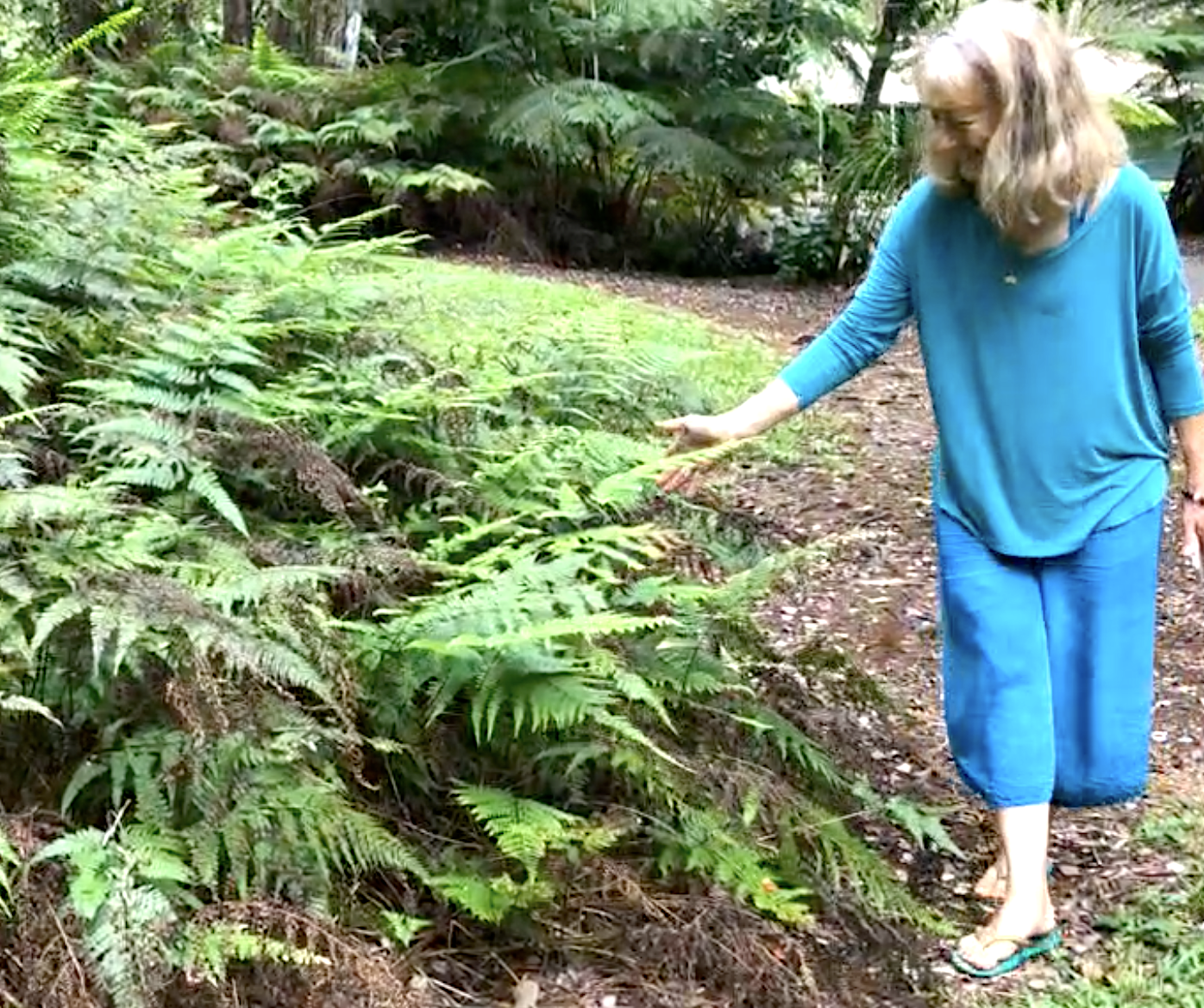 lei for the ceremony. When she woke up one morning, the word Kalōpā imprinted itself upon her mind. It felt like a miracle – she was remembering back to her childhood when she once collected ferns with her hula halau at Kalōpā Native Forest State Park. Sure enough, when we drove an hour north into the hills, we found a beautiful forest filled with exactly the ferns we needed. After years of sweeping our hands in dance through the “deep, dark forest” of ferns, it felt magical to literally see and touch these delicate plants. Wearing them the next day was an itchy honor! 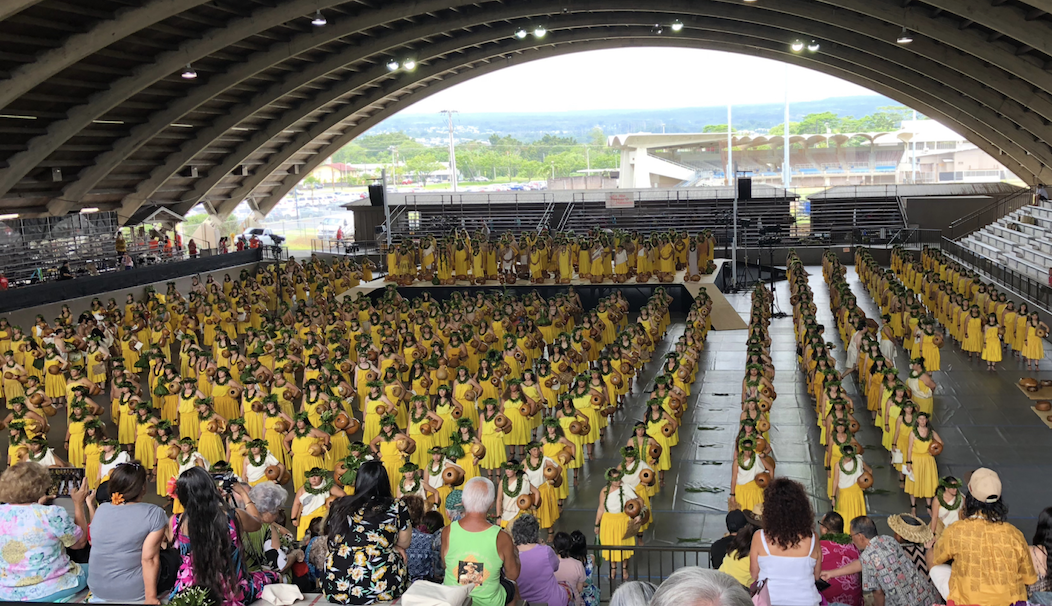 We danced into the opening ceremony, a golden sea of olena (turmeric) dyed costumes, arriving wave after wave onto the stadium floor, some four or five hundred strong. I felt surrounded by support: Kumu Mālia was on the stage behind me, all three of our young men arrayed directly in front of me, and Kai’olena above in the stadium cheering us on. Hawaiian voices chanted in thundering unison all around me as we faced the altar that had been specially assembled and draped with many lei of native Hawaiian plants. The slow, ceremonial passing out of coconut cups of ʻawa, in addition to the hula and chanting, signified the creation of sacred space for the passing on of knowledge. And per Hawaiian tradition, everyone in the stadium was generously fed.

The conference continued with days of workshops, 25-30 offerings a day, and field trips all over the island. We learned so much I’m tempted to create a giant video of the event, but I’ll leave that to professionals!

The entire conference was an absolute tour-de-force by the hula descendents of a “Living Treasure of Hawaii” from 1979, Aunty Edith. Her daughter, Aunty Pualani Kanahele, largely spearheaded the conference – with support from other traditionally trained hula masters: Hōkulani Holt-Padilla, her sister Nalani Kanaka’ole, her daughter Kekuhi Keali’ikanaka’ole and her son-in-law Taupōuri Tangarō, even while mourning the loss of conference cofounder Leinā’ala Kalama Heine.

So there you have my window into the events of Ka ʻAha Hula ʻO Hālauaola, the 5th World Hula Conference. In keeping with the tradition of Hawaiian newspapers in the 1800’s, I’m afraid we will need to hold you in suspense until a future edition of Life at the Center, when I can recount what it all meant to me – the real heart of my story. Until then, a hui hou!