Cliff was a mountain man when I met him in college, fresh off Mammoth Mountain where he lived during high school. He used to love telling me about his naturalist hero John Muir merrily heading off on a trek through the Sierra – which might for last days – with only a loaf of bread in his rucksack. Cliff so convinced me of the beauty of hiking, that we spent our California honeymoon backpacking through Kings Canyon. All that dust and campfire smoke… romantic, yeah?!? ? And yet, let’s not forget the panoramic mountaintop vistas and spectacular sunsets!

After I stopped climbing trees as a kid, I became first a bookworm and then a gymnastics junkie in the gymnasium. Not a lot of outside time. Until I met Cliff. Everything I’ve learned about hiking is from Cliff: simple things, like toe first on the steep uphills, heel first going down the trails. He taught me how to identify a number of the forest trees and plants, including miners’ skunk cabbage, wild onions and gooseberries – edibles that had helped him survive a summer-long hike with his cousin. 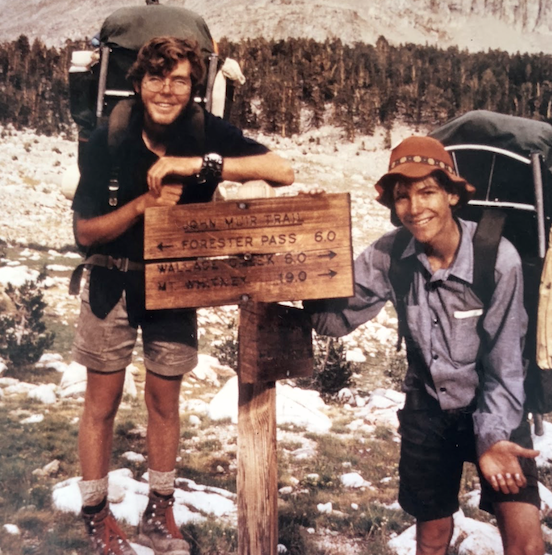 Through some crazy logic I’ll never understand, at age 14 Cliff convinced his mom to let him hike hundreds of miles along the Pacific Crest Trail for an entire summer, alone with only his cousin Mike, a mere 16 year old. It is true that they had been well-trained by Cliff’s Uncle Vic. As good Boy Scouts and with their parents’ help, the boys carefully stashed food supplies near access points along the trail that they judged they would get to about every other week. They planned to supplement these staples with their fishing. Food caches in place, the boys blithely set off on their hike.

Sometimes scaling several mountains per day, they never able to consume as many calories as they burned. Their pre-planned menu would feature fish on the nights they expected to come to a good fishing spot, say, Bub’s Creek. Invariably, those were NEVER the nights they caught fish.

They did successfully catch a chipmunk once, using a bandana tied to fishing line on the four corners. They used trail mix in the bandana as bait, then jerked the bandana up with the chipmunk inside. They let him off on a little island in the creek and enjoyed watching him scamper back to shore. Never thought about eating the little fellow – it was all about the creative entertainment value with no TV to watch, no stereo to play their records.

When the boys hungrily arrived at one of their supply caches, it had already been raided by a bear. Later, another stash of food had been ruined by kerosene from a lamp leaking onto much of it… They gobbled it down anyway, and I don’t know how they didn’t die from that! Cliff says sometimes they’d just eat dry powdered Tang, or they’d fry up skunk cabbage and onions for dinner. Always hungry, they were two very skinny boys by the time they finally wrapped up their adventure. But man, oh man, were they wilderness wise by the time they got out! Cliff is more self-confident about his survival skills than most people I’ve ever met, stemming in part from that long hike in his 14th summer.

Something about hiking – especially long, wilderness hikes – seems to steady the character. Teenage years in modern society can be filled with so much JUNK… It’s a big bad world out there, and many teenagers want as much as they can get of it, or maybe they just have no way to shut it all out.

For several years Cliff and I served as Pathleaders for a wonderful youngsters group called Pathfinders. Whenever we took the kids backpacking in the Sierra, they would spend the first three days in withdrawal: from their transistor radios, Pac-Man games, and Walkman tape players. (Look up the history of that equipment and you’ll see how long we’ve been addicted to our personal distraction devices!) None of that stuff came into the backcountry with us, and we marveled at the amazing human beings who emerged once the kids dropped the trappings of so-called ‘civilization’ and truly entered the world of Nature. The way they talked softened a bit. Their eyes widened.

Sometimes on these hikes, Cliff had the youngsters climb sheer rock faces, often bringing on tears of fear and frustration. His encouraging, unshakeable confidence in their ability to make it to the top ignited their own willpower, so that even the frailest ones managed to successfully hoist themselves hundreds of feet above solid ground. The view was grand. The kids were jubilant at their success! Overcoming hardship and clear physical danger seemed to give perspective to the petty dramas of life in junior high school, and they came out of the mountains invariably calmer, more clear-headed. 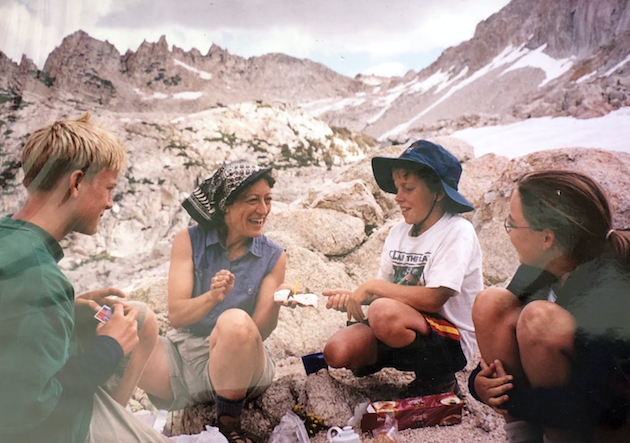 Hiking became an important family activity once we had our own kids. Govi celebrated his tenth birthday with us eating freeze-dried ice cream sandwiches on top of a mountain peak. But he worried every time Cliff would leave our cramped tent to sleep under the stars. Govi had heard that marmots would eat people’s socks when left in their hiking boots overnight, and he was terrified that they’d chomp on Cliff’s sock-covered feet as he slept outside. Fun family memories!

For our daughter Sandhya, the mountains became such a natural part of her life, she chose a college in the Rockies still lives in Colorado; no week is complete for Sandhya without a good hike through her beloved mountains. Older son Shankar had his own long, grueling summer hiking through the Montana wilderness during a time of teenage turmoil and the results were transformative. The next summer he and Cliff reprised much of the Pacific Crest Trail hike Cliff had done with his cousin so many years ago, but they RAN – rather than walked – 256 miles of it! It was quite the father-son bonding experience!

I suspect everyone has their own times of wonder in the mountains or woods – experiences they can’t even put into words. I’ll do my best to tell you about two experiences indelibly pressed into my memory. On a Pathfinder hike in the Sierra, we met up with a river flushed with snow-melt powerfully tumbling down the slope beside us. That river was so mighty, so clear and sparkling with sunlight, I felts as if I were in the presence of a great teacher – in the form of a roaring river – pouring out compassionate wisdom that we could all drink from. I wish I were more capable of conveying the awe I felt so that you could share it, too.

On the last day of that same trip, the Pathfinders and Pathleaders all rose before dawn (which the kids were never willing to do the first days of liking!) We assembled in a large clearing, each child with an inspirational quote to share, as well as a personal reflection on the week’s hiking. As they spoke, we heard the thoughts of old souls, uncovered and undisguised after their time in the mountains.

Then hush fell over us all as someone pointed to a ridge crest just behind us. There, illuminated by the rising sun behind it, was a magnificent deer with a stately rack of antlers. His presence was so stunning, so magical, I don’t believe any of us breathed until the buck disappeared into the sunlight beyond. He had given the crowning touch of mysterious grandeur befitting our time in Nature, and we took our awe back with us into our everyday worlds.

Comments? Email me! – I always love hearing from you.