Nine years can be a long time…or a merely a beat in heart time.

I always loved the photos that Cliff brought back from escorting Sandhya to India nine years ago – our family’s wonderful first trip to the sub-continent. I loved the stories of generous hospitality with which the people of India embraced them.

The two of them always sought the real India, traveling  amongst the locals.

One day they watched a large group of Indian children playing the game of cricket with a make-do bat on an undeveloped scrap of land. My two became so engrossed in watching the game, the children soon invited them to come play, too. Soon they were swinging, missing, connecting and everyone was cheering and laughing. 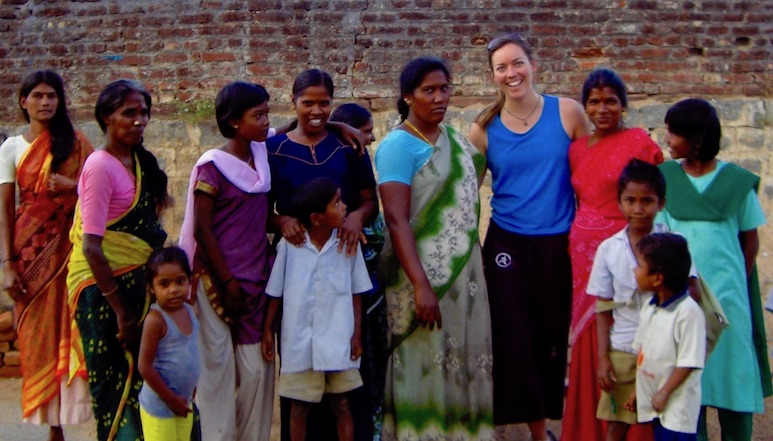 They met locals wherever they went. One of my favorite pictures of that 2008 trip was of our tall, fair daughter Sandhya amongst the group of dark-skinned village women wearing bright sari – one pregnant – surrounded by a small sea of children. I loved the story of those women inviting the two into their homes. The families happily watched Cliff and Sandhya drinking chai and eating their homemade dishes, repeatedly heaping more onto their plates from what must surely have been meager family food supplies.

Thus are lifetime memories made. 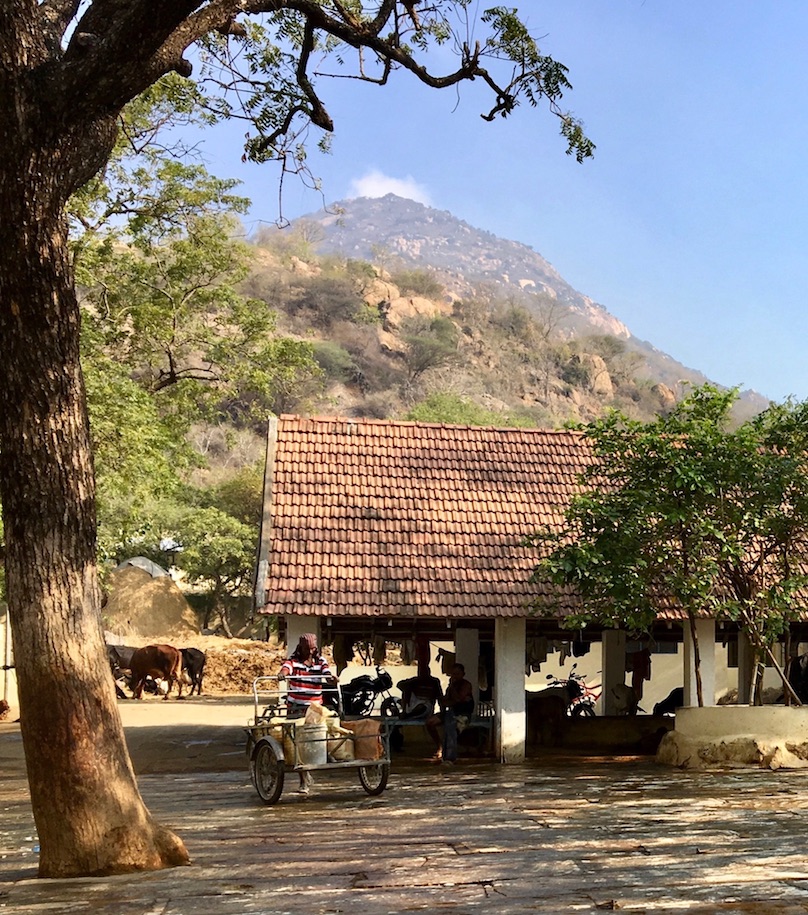 So, nearly a decade later, here are Cliff and I in March of this year on our pilgrimage to India. We’re at the town of Tiruvannamalai, home of one of the sages of the 20th century, Ramanamaharshi. His followers continue to live at and visit his ashram (spiritual center), inspired by this gentle teacher. Cliff had brought Sandhya here before and is bringing me now. The cows and monkeys that Ramana loved and cared for wander freely through the ashram amongst the devotees.

Ramana’s favorite activity was circling the mountain he lived on, Arunachala, which rises up from the outskirts of the city. Cliff and Sandhya had made the trek around the mountain twice during their stay, once barefoot for authenticity! I’m quite keen on doing the 5 hour circumambulation – with shoes, thank you very much!

Cliff and I follow painted stones marking the trail. Once we are about three quarters of the way around, we find ourselves entering the streets of a residential neighborhood. Suddenly Cliff lights up, “I think I know this street! Yeah, Sandhya and I walked through here.” He points: “I think that’s the house where the people lived.”

“Which people?” I query.

“The ones who were so friendly and fed us.”

“THIS is where they live? I had no idea we were in their town.” 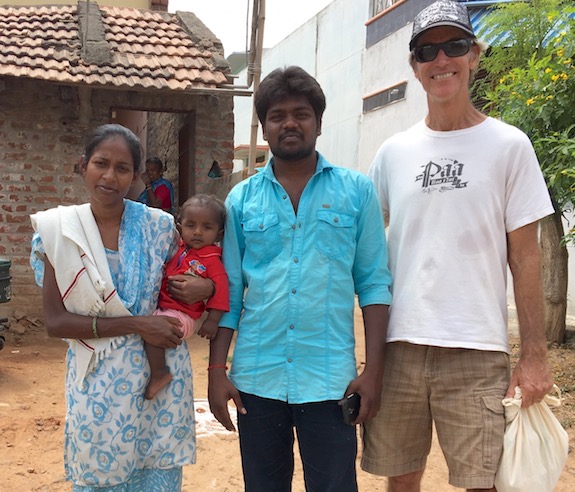 “Yeah! One of these is their house!” Cliff then sees a young couple on the road and begins to question them. “Namaste! Do you know Shivalingam? Where is Shivalingam?”

The young man sorts through the American accent, then brightens and says, “Shiva lingam? Far…” pointing with a long arm gesture in the direction of the distant temple.

The young woman also directs Cliff towards the temple in the city. Cliff at last realizes that they think he’s asking where to find a type of devotional statue called a Shiva lingam.  “OH! I want the MAN Shivalingam. Man. I met Shivalingam man here nine years ago (pointing to this street). Shivalingam’s wife was pregnant (pantomimes big belly)….” 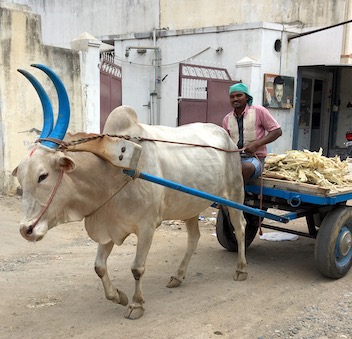 Meanwhile, I’ve wandered down the road a bit, glimpsing a picturesque bullock cart and driver rumbling our way. I ask with hand gestures to take his picture and he agrees with a broad smile.

Once the young people see the man with the bullock cart approaching, all the pieces of the puzzle fit together. They excitedly point out the man to Cliff:  “Shivalingam! Shivalingam!”

Cliff now sees him and yes, indeed, this is the same man whose family he and Sandhya met 9 years ago, on this very street. Great rejoicing ensues.

In minutes the family clan gathers around us, everyone thrilled to have found long-lost friends. They bring us onto their porch and someone fetches a bottle of mango juice to serve us. 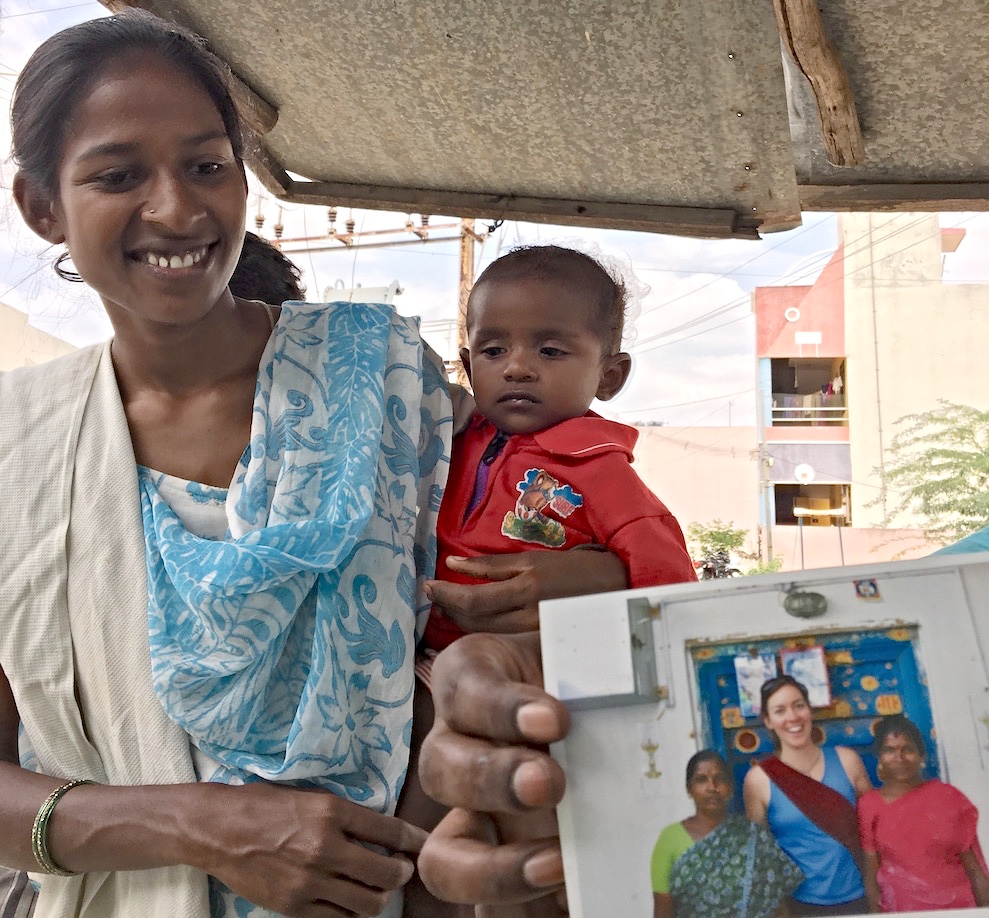 The grandmother brings a tattered photograph album from her house, containing no more than 30 photos total of all their extended family over the years. Among those few treasured photos are nearly a dozen that Cliff sent them long ago of him and Sandhya with Shivalingam’s family.

Proof! We have refound each other! Hugs all around. We meet Shivalingam’s nine year old son plus his two younger siblings…”You’ve been busy!” Cliff teases Shivalingam. The husband and wife look at each other, get the joke (which is even funnier if you understand the translation of his name) and everyone laughs delightedly. 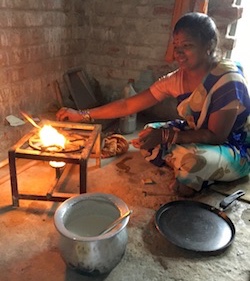 We can barely wait to tell Sandhya! But she’s asleep halfway ’round the world in Colorado. His wife Wanita and her mother Amaliga, both absolutely charming in their shy village way, invite us to breakfast the next morning. That gives us enough time to collect gifts for the family.

The next day, squatting before a small stove on her earthen floor, Wanita prepares us delicious dosas while we sit in the home’s only chairs, plastic. Then we all traipse up to the rooftop to get a cellphone signal for our reunion call to Sandhya. 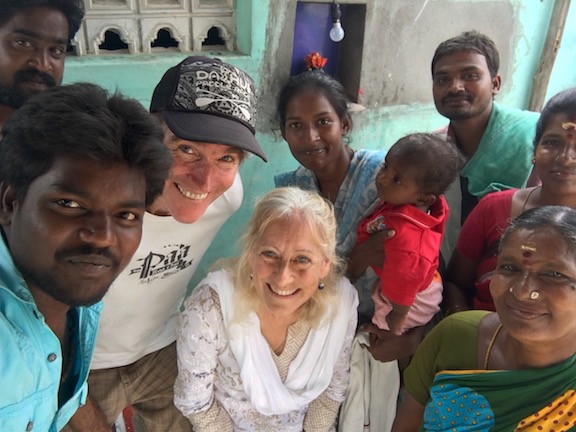 Much broken English and Tamil and hand gestures and laughter erupt when she picks up our phone call. We are threading together a connection over almost a decade of time, over 8,981 miles, and between many happy hearts. Tears brim when the call is over and we depart.

Cliff and I have totally and completely given our hearts to the warm, wonderful people of India.

Tell me about a time when you connected to someone in an unexpected way. Simply hit REPLY!